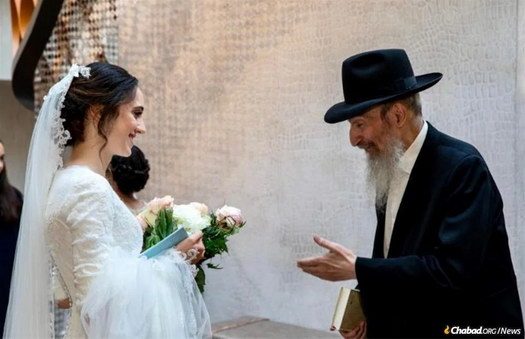 Rabbi Eli Cohen and granddaugther Bassie Weitman at her wedding.

Depending on who you ask, Rabbi Elie Cohen might be described as either a brilliant Torah scholar or a brilliant mathematician. But for those who knew him best, he was both—a devoted rabbi and a dedicated professor—a man of deep faith and extensive knowledge, who passed away in Montreal at the age of 79 in late January from complications of coronavirus.

“My father was constantly learning [Torah]. He didn’t waste a minute,” Rabbi Mendy Cohen, Chabad-Lubavitch emissary in Sacramento, Calif, told Chabad.org. “He was also a giant in mathematics, but he didn’t bring that home. He was very dedicated to us. He did homework with us and instilled in us a great love of Torah.”

“I knew as a child that my father was special,” his son continued, “but I didn’t how much the community loved and adored him until we sat shiva. He never talked to us about what he did in the community or at the university.”

Robert Raphael, a professor of mathematics at Concordia University in Montreal, worked with Cohen for many years and said that students learned much more than mathematics from Cohen. “They learned discipline, politeness,” said Raphael. “He didn’t know the meaning of lashon hara [improper speech], it didn’t exist for him,” the professor continued. “He respected his students and they, in turn, respected him. They knew if they came to me, I could be a tough guy, but Elie would listen to them and help them. He was just a gentle person, that was Elie.”

Raphael recalled the many discussions that he and others had with Cohen on Jewish thought and practice. “You could go to him with tough, complicated questions on Judaism and he would give you well-thought-out answers,” the professor recalled. “He liked answering questions; it connected him with the non-Chassidic world.”

Raised in a Traditional Tunisian-Jewish Home

Elie Cohen was born in 1941, in Tunisia, and raised in a scholarly Sephardic Jewish home. When he was in his teens, he was drafted into the Tunisian army. Eager to avoid that fate for their oldest son, his parents, Moshe and Leila, made the decision to leave Tunis and move to Montreal, where people spoke French, their native language.

A descendant of mekubalim (mystics)—his great-grandfather was a noted kabbalist known as the Aron Chai (“living ark”)—Cohen was attracted while a college student in Montreal to the teachings and example of the Rebbe, Rabbi Menachem M. Schneerson, of righteous memory, and to the joyous study and practice that he saw in Chabad Chassidim. He soon began studying with some of the more senior Chassidim, like the renowned kabbalist and mashpia (spiritual mentor) Rabbi Wolf Greenglass.

Wanting to spend more time learning Torah, he wrote to the Rebbe about his desire to leave McGill University, where he was studying mathematics. The Rebbe encouraged him to continue with both of his studies, and he received semichah (rabbinic ordination) the same year he received his Ph.D. in mathematics and statistics.

In 1967 he married Rochel Gurewitz, who had been born in a displaced persons camp to Rabbi Tzemach and Chana Rivkah Gurewitz. Rochel’s grandfather was Rabbi Yitzchok Gurewitz, known as Itche der Masmid, one of the most respected Chassidim of his generation.

With his wife’s support, Cohen continued with his dual pursuit of learning and teaching both Torah and mathematics throughout his life. At the behest of the Rebbe, he taught Chassidic philosophy to Sephardic Jews, and would also give classes to anyone else who wanted to learn. “Any time he was asked to give a class, he never said no,” said Mendy Cohen. “As he told me, ‘This is the shlichus (assignment) the Rebbe gave me.’ ”

Elie Cohen continued to give classes in Torah for the rest of his life, teaching one of his last classes on Zoom after returning home from the hospital, where he’d spent months battling the coronavirus.

At Home, a Loving Father

At home, though, Elie Cohen was just a father and learned Chassid. When his children were young, he would set aside time to learn Torah with them and help them with homework. He instilled a love of Judaism that penetrated deep into the hearts of his children, grandchildren and great-grandchildren.

“Chinuch, education, didn’t just happen,” said daughter Esther Tiechtel, a Chabad emissary in Nashville. “He guided us in our learning. He made Torah learning a focal point in our home. The last thing we would see at night before bed was my father with a Talmud, his finger on it and humming. In the morning we would see him learning.

“My father always wanted to be b’simchah, with joy,” said Tiechtel. “That was very important to him. I remember him telling me there’s bad and there’s good. You can focus on the bad, but why not focus on the good?”