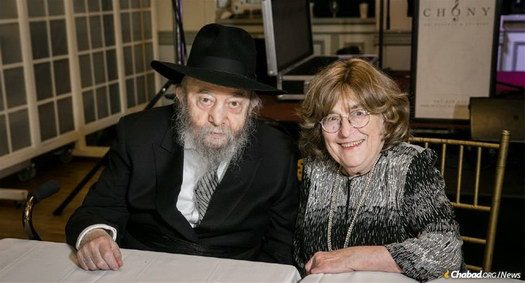 Mrs. Miriam Rosenblum, a beloved educator in Pittsburgh for more than five decades and the founder of Keren Racheim, a local organization committed to helping those in need, passed away last month at the age of 78. Her passing came only two months after the loss of her husband, Rabbi Ephraim Rosenblum.

Miriam Wolosow was born 1942 in Russia to Reb Nochum and Sara Relka Wolosow, members of the Samarkand Chassidic underground community that helped sustain Judaism during decades of Communist oppression. She spent the formative years of her life post-World War II in a displaced persons camp in Paris. She later moved with her family to Ireland before immigrating to the United States.

In 1961, she married Rabbi Ephraim Rosenblum, and together they moved to Pennsylvania, where Rabbi Rosenblum served as the principal of the elementary school of the Yeshiva Schools of Pittsburgh for decades. Mrs. Rosenblum was a much-loved kindergarten and first-grade teacher for 55 years.

In her role as the wife of a prominent rabbi and educator in a large and thriving Jewish community, she supported her husband in his work while raising a large family, working as a committed teacher and running important communal projects. The one she was most devoted to was “Keren Racheim,” short for Rebbetzin Chaya Mushka, which Mrs. Rosenblum founded and named for the wife of the Rebbe, Rabbi Menachem M. Schneerson, of righteous memory shortly after her passing in 1988. She ran a “one-woman show,” raising hundreds of thousands of dollars for people in need, providing families with food for the holidays, financial means for weddings and bar mitzvahs, and oftentimes, even going so far as to helping people find jobs.

“My mother gave with all her heart and all her soul,” says Mrs. Rosenblum’s daughter, Chanie Baron, an educator and a shlucha. “We grew up with people coming to our door, taking people in, helping people out, mentoring, guiding. She was unstoppable.”

She describes how her mother single-handedly raised all of the funds for Keren Racheim. “No one believed that an organization like that could be run by one person; it was the kind of organization that could have been run by at least 10 people. She made sure that families had all their needs met for the holidays—new clothes and shoes for the children, chicken and fish, freshly cooked meals. Whatever people needed, she gave without asking questions. She was a shlucha through and through.”

Not a Single Person Was Turned Away

Her son, Rabbi Yossi Rosenblum, principal of Yeshiva Schools of Pittsburgh, said that during the shiva for his mother, “there were many people that were crying as they recalled how my mother came through for them when they were in a desperate financial situation. Everything was done in such a discreet, sensitive manner. No one, sometimes including my own father, knew that they were receiving financial help, and not a single person was turned away. When she didn’t have the monetary means to give someone assistance from the organization, she would give of her own personal money. Many of the people that she helped ended up becoming donors of the organization, supporting Keren Racheim with whatever financial means they could.”

Rivky Raices, Rosenblum’s daughter, an educator and shlucha in Skokie, Ill., describes how her mother instilled in her and her siblings “a real pride of being a ‘Lubavitcher.’” She says that her mother brought up her and her siblings with very strong values of right and wrong. “We knew if it was right, it’s right, and if it’s wrong, it’s wrong. We always had an open home—no one was ever turned away—and we knew ‘the best went to the guest.’ We never resented it.”

Raices describes how her mother became the “the home away from home” for baalei teshuvah—young women and men who had recently returned to their Jewish heritage, helping them become socially and culturally integrated into the Lubavitch community. “She gave them encouragement, she understood them, and she was completely non-judgmental.”

As a rebbetzin, people flocked to Mrs. Rosenblum’s home to seek her advice and to hear her wisdom. “To every individual with whom she came in contact, she sent a clear message: ‘You matter, you are important, and I will do everything in my power to help you,’ says Blumi Rosenfeld, a former student of Rosenblum and later a fellow teacher and wife of Rabbi Yisroel Rosenfeld, director of Chabad of Western Pennsylvania.

Blumi Rosenfeld was among the first students that Rosenblum taught at Yeshiva Schools of Pittsburgh. As a child of only 5 years old, she recalls what a remarkable impression Mrs. Rosenblum made on her. She has vivid memories of Mrs. Rosenblum teaching her students the alef beis, among many other lessons, with love and sincerity.

Later in life, Rosenfeld had the opportunity to teach alongside her beloved teacher, and she had the opportunity to observe Mrs. Rosenblum’s relationship with her students firsthand from the point of view of a colleague. She describes the manner in which she believed in every student: “To her, the claim that ‘we are not equipped to deal with your child because of his/her behavioral issues’ was completely nonsensical. She never gave up on any child.”

A Teacher Who Believed in Every Child

“She reached the children that no one else seemed to be able to reach,” said Rosenfeld. “To many people in the community, she was called by her first name. Yet until her very last day, to me she was simply ‘Morah Rosenblum.’ I had a tremendous amount of respect and reverence for everything she’d taught me.”

Yehudis Okonov, a grandchild of Rosenblum who serves as a Chabad-Lubavitch emissary in the Brighton Beach section of Brooklyn, N.Y., recalls: “Although I was never my grandmother’s student like some of my cousins, I know that she customized her lessons for each child individually. She really wanted every child to be able to learn and really believed in each child.”

Every single day of the year, rain or shine, Mrs. Rosenblum could be found at her booth on Murray Avenue, one of the main streets of Pittsburgh’s Squirrel Hill. There, outside of the kosher supermarket, she would set up shop to offer people “good cards” and Shabbat candles. “Lots of non-Jews on Murray Avenue knew my mother by face,” says Rabbi Yossi Rosenblum, “and I’m sure if you’d ask them about my mother, they’d proudly and happily pull out their ‘good cards’ from their wallet and show you.”

Mrs. Rosenblum was passionate about spreading the message of the imminent redemption and oftentimes could be heard sharing a story, an anecdote or a teaching from one of the Chabad Rebbes about Moshiach. Rosenfeld describes how Mrs. Rosenblum would make the long walk to a weekly women’s Shabbat gathering, where she would share a “Moshiach Thought,” as she called them.

“There were women who were much younger than her who had a hard time climbing the hill and walking in the heat each week to the Shabbat gathering,” recalls Rosenfeld. “Morah Rosenblum made sure to be there each and every week, no matter what.”

“They don’t make ’em like that nowadays,” says her son, Rabbi Yossi Rosenblum. “My father, of blessed memory, who was a tremendous person, was known to say: ‘Everything I do is ordinary, and to be expected, my wife is extraordinary.’ She really was extraordinary.”