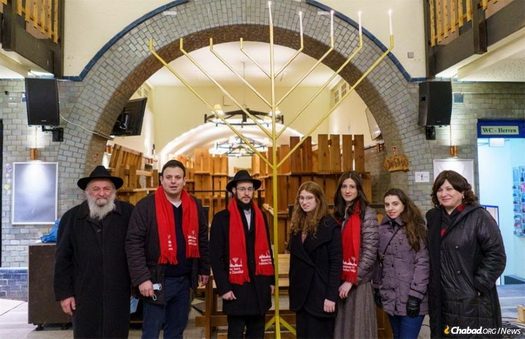 When Rabbi Binyamin Wolff passed away in Hanover, Germany, at the age of 43 last April following a brief illness, he left behind his wife, Shterna, their eight children, and a shocked and devastated Jewish community. But the tragedy has not deterred Shterna Wolff from the mission that brought her family to Hanover in 2005. On the contrary, with encouragement and support from around Germany and the world, she is overseeing a major expansion of Chabad’s activities in the city with a new Jewish center being built in her late husband’s memory.

Wolff’s decision to bury her husband in Hanover and to remain in Germany with her children surprised some people at first, but, she told Chabad.org, it was a natural extension of how she always understood her role as an emissary of the Rebbe, Rabbi Menachem M. Schneerson, of righteous memory.

“When my husband was in the hospital, I told him ‘we are not leaving,’” said Wolff. “When asked about funeral arrangements to transfer his body to Israel for burial, without hesitation I declared that we are burying him here in Hanover.”

Wolff noted that when a Chabad-Lubavitch emissary moves to a place far from where they were born and raised, it is usually understood that it is a lifetime mission. “When emissaries move to a particular city, they are there to create lifelong relationships with the local families and become a vital and essential part of the community, “said Wolff.

“Even when life gets rough and the difficulties unimaginable, we draw strength from the Rebbe,” she continued. “Even when we do not understand and we cry out, we still move forward in our shlichus. It gives us hope and faith in a better tomorrow, even when today is still dark.”

That faith and hope already has had tangible results. With the help of an online campaign that attracted more than 16,000 individual donors, Chabad of Hanover secured a mortgage for a beautiful, spacious building right beside the Bismarck train station, one of the city’s major transit hubs. A city of just under 800,000 residents in north-central Germany, Hanover had about 5,000 Jewish residents before World War II. A grand, neo-Romanesque-style synagogue that stood proudly in the center of town was destroyed during the Kristallnacht pogrom of 1938. Very few of the city’s surviving Jews returned to the city at the end of the war, with Hanover’s current Jewish population mainly immigrants from the former Soviet Union and businesspeople from Israel and Western Europe.

The new Chabad center, Beit Binyamin, will house a synagogue, classrooms, offices and a kitchen in the three-story, 5,000-foot space. The building is currently undergoing renovations with the hope of moving in by the summer of 2021. Many individuals and organizations are involved in the project, including local real estate agents; prominent members of the Berlin Chabad community; the George Rohr Foundation; the Charidy crowdfunding platform; Rabbi Moshe Kotlarsky, vice chairman of Merkos L’Inyonei Chinuch, the educational arm of the Chabad-Lubavitch movement; and others.

A Challenging but Successful Year

This last year has been uniquely challenging, noted Wolff, especially for organizations involved in communal and social outreach. “Our activities have not decreased at all, despite the coronavirus,” she said. “In-person classes have moved online to Zoom in accordance with health guidelines. We aren’t stopping anything; our community members yearn to study.”

“Sometimes, when I pause to observe from the sidelines, I can’t believe all that is going on and how I can possibly manage to do it myself. True, I was always a partner in all of our activities, but Benny was always at the forefront, and only now do I realize how intense his workload was, constantly engaging with people and forming new relationships.”

Binyamin and Shterna Wolff were both raised in Israel, surrounded by Jewish life, but they knew that they wanted to dedicate their lives to reaching out to all Jews wherever they may be.

After their marriage, the couple spent five years in Odessa, Ukraine, assisting the local Chabad couple in the city—Rabbi Avraham Wolff, Binyamin Wolff’s cousin, and his wife, Chaya, Shterna Wolff’s sister—before moving to Hanover, where many Jews from the former Soviet Union settled, making the Russian language they learned in Ukraine handy.

Asked about her decision to remain in Hanover despite the challenges, Shterna says that it was hers alone. “Our work is crucial; we are lamplighters who uplift Jewish souls. It is difficult to continue to during this painful time, but we see that when we persist, we are successful,” she said. “The last seven months have been a whirlwind of intense activity. I feel as if I have been fighting for survival. I have encountered so many tribulations on the path to secure a permanent building for our Chabad House which symbolizes permanence and strength of our commitment to our community, and the amazing things we will do for decades to come.”

“Thank G‑d our fundraiser was successful. After a series of disappointing bank encounters, when the mortgage broker saw the outpouring of support for us, 16,000 individual donors, he was genuinely impressed and helped streamline the purchase,” she added.

Rabbi Yehuda Teichtel, who serves as the rabbi of the Jewish community of Berlin, and heads Chabad’s activities in the German capital with his wife, Leah, was present at Wolff’s bedside when his soul departed his body on Friday evening, April 24. When he first heard of Wolff’s condition, Teichtel swung into action reaching out to his contacts in Hanover, including the governor of Lower Saxony Stephan Weil, to ensure that Wolff was receiving the best care possible and that the rabbi was hospitalized at the best medical facility in the region.

Rabbi Yehuda Teichtel, who serves as the rabbi of the Jewish community of Berlin and heads Chabad’s activities in the German capital, as well as Rabbi Shlomo Bistritzky, Shliach to Hamburg, were present at Rabbi Wolff’s bedside when his soul departed this world on Friday evening April 24th. When he first heard of his condition, Rabbis Teichtel and Bistritzky swung into action reaching out to their contacts in Hanover, including the mayor Belit Onay, to ensure that Benny was receiving the best care possible, and he was indeed hospitalized at the best medical facility in the region.

“Shterna is an impressively brave woman. She said there is no reason to bury her husband in Israel because his shlichus in Hanover was his life,” said Rabbi Teichtel. “At the funeral, we promised Rabbi Wolff that we would always support his family and find a permanent home for his growing Chabad House. We immediately began looking for a location. We encountered miracles overcoming the many financial obstacles. Banks were very hesitant to finance such a (nonprofit) venture. We were turned down by three banks before one agreed to assist us with the financing and with the Rebbe’s blessing, we were successful.”

“Until now, the activities of Chabad of Hanover have been growing out of their current rented space; now they are anchored in a beautiful permanent location,” Teichtel added. “This is the Chabad way of dealing with tragedy. In life, you are often dealt with setbacks and the key is to know how to respond, how to turn a negative situation into a positive one.”

Rabbi Teichtel referred to a prominent tragedy in (recent) Chabad history: when Palestinian terrorists murdered five students and an instructor in the village of Kfar Chabad, Israel, in 1956, the Rebbe instructed the shaken locals to dig in, expand and further develop the town and its institutions as a response to the tragedy.

The fact that Jewish life is thriving in Germany today is testament to this spirit. What can be a more appropriate response to Nazism than a public Menorah lighting at the Brandenburg gate, merely a few blocks away from the former Gestapo headquarters?

A Good Decision for the Community

When the Wolff family settled in Hanover in 2005, Sagit Cantker helped them get settled and acclimated with the city. Raised in Israel, Cantker, a medical-diagnostics marketing executive, has been living in Hanover for almost two decades.

“I am not a religious person, but I formed strong bonds with Binyamin and Shterna, they were always so approachable,” Cantker told Chabad.org. “My daughter learns about Jewish holidays and customs at their Sunday school. I am grateful to Chabad for enabling me to convey Jewish traditions to my daughter. Chabad is the warmest, most inviting place in town. No other Jewish movement can provide me with what Chabad does.”

“Now, after Rabbi Benny’s passing, I find it difficult to visit the Chabad House because I feel his absence,” she added solemnly. “He had a constant smile, and was so warm and kind. He always had time for you. It was so pleasant to visit, and to attend classes and events. I miss him. Shterna made a difficult but correct choice, both for her and the community, in deciding to remain.”

Samuel David was born in Israel but lived most of his life in Germany, where his father escaped from in 1933 and returned to in 1955. After decades of living in Hanover, he was pleasantly surprised to discover the existence of a thriving Jewish center in his city last summer after a chance encounter at a family event in London. He paid the Chabad House a visit, Rabbi Wolff invited him to Shabbat services, and he was very impressed.

“Rabbi Benny was so kind and wise. He was a good and charismatic teacher, and everything he did was wholeheartedly and with a smile,” David told Chabad.org. “I began to attend services regularly and have become increasingly more involved at Chabad. I now help out with translating from Hebrew to German, and I give Hebrew lessons as well.”

“Rabbi Benny’s passing is a terrible tragedy for all of us,” he said with noticeable pain in his voice. “My wife passed away, leaving me alone, and Chabad has filled a void in my life with purpose.”