« Dr. Zelenko Warns Of New COVID Virus Strain, Calls To Use Every Weapon to Combat it
Gan Yisroel Parksville Has Announced Dates For the Summer of 2021 » 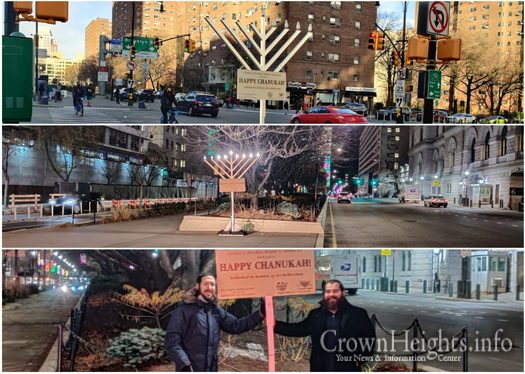 At the entrance to the Brooklyn side of the Brooklyn Bridge, Rabbis Aaron Raskin and Yankel Raskin of Chabad of Brooklyn Heights and Rabbi Yossi Rapp of Chabad Air placed a beautiful electrical 10 foot Menorah in memory of Ari Halberstam to spread the light of Chanukah and freedom to all the cars and pedestrians that will pass this busy intersection.

The Menorah was made possible through the hard work of Mrs. Devorah Halberstam, who worked tirelessly with city officials to place the Menorah at this central and distinguished location.

Mrs. Devorah Halberstam said, “Thank you for the beautiful gesture of marking the Brooklyn Bridge where Ari died, Al Kiddush Hashem, with light. It would be exactly what he would want. Especially since Chanukah was when he received justice in the courts.”

Chabad of Brooklyn Heights conducts annually the ceremonies at the Rabbi Jacob J Hecht Menorah, the official Menorah of Brooklyn located in front of the supreme court and the Brooklyn Borough Hall, but “this year we wanted to do something new”, says Rabbi Aaron Raskin.

Rabbi Yossi Rapp of Chabad Air said, “There is always room for more light, especially a place like the Brooklyn Bridge which unfortunately experienced the devastating terrorist attack on the Chabad community. I am happy to be part of this great project.”

Rabbi Yaakov Raskin of Brooklyn Heights said, “This is a monument of light for Ari who was full of light.”

The Menorah was lit at the crossway for the 8 days of Chanukah.

« Dr. Zelenko Warns Of New COVID Virus Strain, Calls To Use Every Weapon to Combat it
Gan Yisroel Parksville Has Announced Dates For the Summer of 2021 »