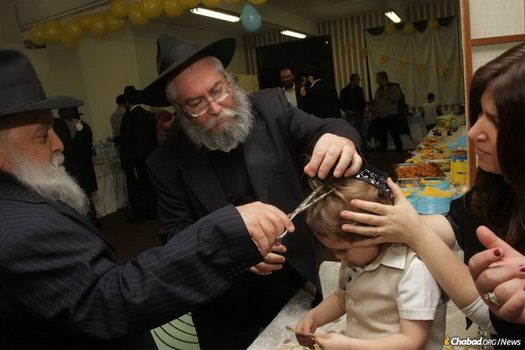 Rabbi Chaim Shaikevitz, center, was a beloved community rabbi who had a signature touch of personal care and attention for people of all ages in Milan, Italy. (Photo: Rinati Dor Dvorski).

Rabbi Chaim Moshe Mordechai Shaikevitz, a dedicated Chabad-Lubavitch emissary and pillar of the Jewish community in Milan, Italy, for more than three decades, passed away Oct. 23 after a sudden heart attack. He was 61 years old.

Born and raised in the village of Kfar Chabad, Israel, to Rabbi Dovber and Rivka Shaikevitz, young Moshe excelled in his studies and became known for a desire to help others that would be a hallmark of his life and his rabbinic career. After receiving rabbinic ordination, he married Soshe Garelik, daughter of Rabbi Gershon Mendel and Bassie Garelik, the Rebbe’s chief emissaries to Italy. He and his wife moved to Italy to set up their own family and join the ranks of Chabad of Milan.

With the arrival of this young, soft-spoken rabbi, the community was changed forever.

A naturally quiet and exceedingly humble person, Shaikevitz wasn’t known for speaking publicly at large events or making a big splash. Instead, from behind the scenes and individually with countless people, he made tremendous impact wherever and whenever he could. Armed with his passion for Torah and an erudite mind, he immediately began studying Torah with as many people as he could, and slowly but surely built an impressive following.

Rafael Nemni was in his early 20s and nominally involved with Chabad when Shaikevitz first moved to Milan. The two soon struck up a friendship and started studying Torah together. Every day, Nemni would make the trek from one side of town to the other just to be able to learn with the rabbi.

Little did he know that this study partnership would be the beginning of a long and deep relationship for his entire family.

“Rabbi Shaikevitz was literally like a father to us,” said Ghuela Nemni, Rafael’s wife. “At every moment of our lives, he was always there with guidance and with love. Whatever it was, he helped us through. From legal to parenting advice, my husband and I would always say that Rabbi Shaikevitz is the ‘conscience of our family,’ ” she told Chabad.org.

“We thought that we were the only ones like that. But it turns out that many other families and individuals felt the same way: Rabbi Shaikevitz was like their father, guiding and teaching them, and always available with a listening ear.”

Even the story of his expanded reach across the city began with his signature touch of personal care and attention.

In his beginning days in Milan, the center of activity was in the Zona Via Cellini neighborhood where many Jews resided and where much of the local Jewish activity took place. When Rabbi Shaikevitz arrived, he assumed his role of teaching and studying with people there.

It was in those days that Nemni would make the trek across town, as he lived in the Zona Scuola Ebraica neighborhood some distance away. As a working man with a busy schedule, after taking the time to go back and forth and study with the rabbi, Nemni wouldn’t get home until fairly late. As young newly marrieds, it wasn’t the optimal situation, so Ghuela privately consulted with Rabbi Shaikevitz what to do.

It was in the context of these conversations that the idea of opening a small center of activity in Zona Scuola Ebraica was born. The idea was for Rabbi Shaikevitz to go there and learn with Nemni—and while at it, he would be able to learn with many other Jews living in the neighborhood.

A Thriving Center for Torah and Jewish Life

And that’s exactly what happened. Today, the Beit Hatalmud center of Milan on Via Luigi Soderini is a thriving center of Torah learning and Jewish life.

In its early days, Rabbi Shaikevitz decided to bolster the small hub of study with a steady presence of yeshivah students. To that end, he opened a program for rabbinical studies there in 1996, welcoming a group of yeshivah students from Israel to stay for the year and study for their rabbinical degree and learn with community members as well.

Tzemach Mizrachi was one such student, who joined the program in its second year. He connected quite deeply with the community members there—so much so that when he eventually married his wife, Efrat, they requested that he and his wife move back, pledging their support.

Rabbi Shaikevitz was Mizrachi’s biggest cheerleader, pushing him to accept the offer and move with his family to Milan to undertake responsibilities in Beit Hatalmud.

Mizrachi, too, speaks of how Rabbi Shaikevitz was like a father to him, mentoring and guiding him at every step of his life. “He was so humble, and so interested in the success of everyone else. He would start something and then put someone in place, happy to see them steer it forward. He pushed me to become the rabbi here and was happy to see me succeed,” he told Chabad.org.

“But it wasn’t just taking over duties at the shul; it was so much more. When the local mohel was no longer able to perform brit milah duties in Milan, community members would have to bring a mohel from France or come up with other creative solutions. So one day, Rabbi Shaikevitz called me into his office, and together with Rabbi Garelik, strongly pushed me to learn the trade and become a certified mohel. The truth is, I always dreamed about being a mohel, but I would have never actually done it if not for Rabbi Shaikevitz’s push,” relates Mizrachi.

And who was the first baby boy on whom Mizrachi performed a bris? Rabbi Shaikevitz’s grandson, of course.

“From behind the scenes, I know that in the first few years when I became a mohel, Rabbi Shaikevitz would call people and urge them to use my services, assuring them of my competence and skill.”

Nemni, a university professor and author, speaks of the same trait in her life—how Rabbi Shaikevitz would always push her to influence people around her.

She recounts of one incident when a certain family she and her husband had helped considerably ended up speaking ill of them to others. Distraught, she called Rabbi Shaikevitz, crying to him on the phone about the unfairness of it all.

“I’ll never forget his reaction,” she says. “He laughed, and then pointed to the Shabbat morning prayers in which we ask G‑d to bless for all those involved in communal work.

“’Do you know why we ask for this blessing?’ he asked me. ‘It’s because community activists don’t always get blessings from the people they impact. So, we ask G‑d to bless them instead.’

“His words were so comforting, and I remember them every time I work with others—and I’m comforted again.”

Spiritual DNA of the City

While deeply personal, Shaikevitz’s activities were wide-reaching as well. In Nemni’s words, “He was the spiritual DNA of the city.” For holidays, he would arrange inclusive communal gatherings, as well as farbrengens on the Chassidic holidays sprinkled throughout the year.

Nemni fondly recalls the many Purim events throughout the years, a large-scale effort Shaikevitz would spearhead, bringing together as many as 600 families from across Milan’s diverse Jewish landscape.

Rabbi Shaikevitz also headed up Beis Chana, a teacher’s seminary for young Chabad women from all over the world. For many years, he also directed a summer program for boys from abroad in Milan. As an increasing amount of Jewish tourists began frequenting the city, he provided for them, too—with kosher food, lodging and other services for the travelling Jew. In later years, he also became involved with the chevra kadisha.

Nothing was too difficult or too menial. While Mizrachi is the rabbi at Beit Hatalmud, it was Rabbi Shaikevitz who took care of everything else—from setting up the Kiddush to paying the electric bill. Nemni remembers as a young girl in the Chabad school how Rabbi Shaikevitz would take the time to patiently sit with her mother and go through the school menu, ensuring that it was nutritious.

Most of all, through Torah study and his passion for Judaism, he personally transformed the lives of hundreds. “There are so many people today who are committed to Judaism because of Rabbi Shaikevitz,” said Nemni. He was a true Torah scholar, always with a Torah book in his hand and always encouraging others to study as well.”

Thinking back to the many years of so much activity, Nemni summed it up: “He caused a spiritual revolution in this city.”

He is also survived by his parents and in-laws.