« Shluchim of Solihull Face The Challenge of COVID with Meals For Seniors
Weekly Story: The Rebbe Rashab » 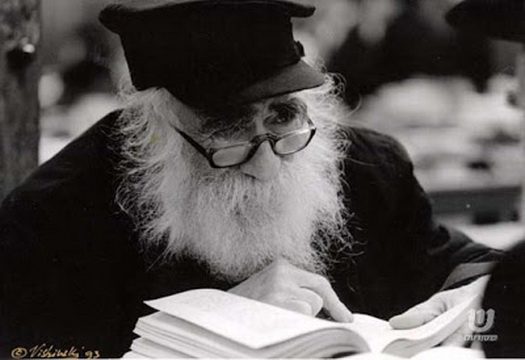 in his weekly letter, Rabbi Zalmen Wishedski wrote of an encounter with Rabbi Mendel Futerfas z”l, that teaches a lesson on to look at the world, and how to laugh at it.

Towards the end of the Seder, my father said: “Let’s finish up quickly and go to Reb Mendel. He needs help, for sure.”

R. Mendel, for those who don’t remember, is the chassid, Rabbi Mendel Futerfas z”l, one of the staunchest soldiers of Soviet Jewry during the years of Stalin’s reign of terror. He was fearless; he had been imprisoned for ten years in prisons and in the Soviet camps; a smart Chabadnikwho was a masphia – a guide – to many people. Reb Mendel was very close to my father’s family, and he lived a two-minute walk away from our home in Kfar Chabad.

He was then 86 years old. His spirit was young and bright, but his body, and mainly his legs, couldn’t keep up with him.

When we came in, we found Reb Mendel sitting on the couch, dressed in a silk kapota, his gartel around him like a belt, and his Jewish-Russian cap planted on the front of his head, almost covering his forehead. “You arrived,” he said, smiling all over, almost laughing. “I need to use the facilities, but I can’t move.” And again, he laughed.
My father motioned to me to grab his right arm, while he grabbed his left arm, so that we could together try to lift him off the couch.

While we were bending over and working on getting him up, and he was laughing and saying, “Nu, pick me up, pick me up,” his wife, who was very concerned about him, came and said, “Mendel, I told you not to drink the entire Four Cups of wine – not to mention that it was heavy wine (wine that R. Chatzkel Shpringer z”l of Kfar Chabad used to make himself), and then there are the matzahs and the marror. The doctor, too, said it’s not good for you.” Reb Mendel looked at her and listened, and then he looked at father and me, and suddenly uttered a sentence that has remained with me since: “For eighty-six years I have been laughing at the world – and now I should start listening to it?”

R. Mendel was always called up to the Torah with the name “Menachem Mendel ben Menachem Mendel”, because his father died before he was born. The world and his sense of logic were against him even before he was born, and since then, in the Lubavitch Yeshiva in his childhood, and while experiencing the cruel Communism in his youth, the years of exile in Siberia, being separated from his wife and children for twenty years, all the way to his becoming the mashpia of the yeshiva in Kfar Chabad – every day he would look at the world, seeing the whites of its eyes, and would laugh about it. He laughed at everything the world said to him. So, the world and logic were really right when they said that that a person at his age and in his condition should not drink the Four Cups fully, eat marror by the mouthful and lots of matzah shmurah, but the world had gotten the address wrong. Reb Mendel laughed at it and he had no intention of stopping to laugh at it at age 86.

The first Jewish baby received the name Yitzchak (“He will laugh”). That was the fist name that the father of our nation gave his son. In fact, it was Hashem Himself who gave the order to name him thus. Why? So that we will always remember that laughter is part of our life, part of our existence.

People laughed at us from the time Yitzchak was born. But we continued to laugh ourselves in spite of everything. We too laughed at the realistic and logical world since we came into being and until this very day, and we did not give in. Again and again, we did the impossible and succeeded, and it is due to that that we have survived these past 4,000 years.

And, by the way, we managed to get him up in the end.

« Shluchim of Solihull Face The Challenge of COVID with Meals For Seniors
Weekly Story: The Rebbe Rashab »