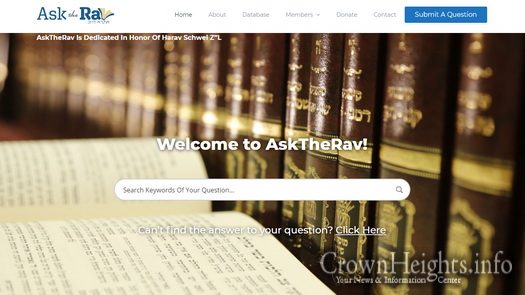 Ask The Rav, a Chabad website for asking Halachic questions to a Rav, has published a list of commonly asked questions regarding Yom Kippur, along with the answers.

Q. I am pregnant. Do I have to fast on Yom Kippur?

A. Pregnant women must fast on Yom Kippur.

A woman in labor is permitted to eat and drink. However, whether it’s advisable medically to eat and drink during labor is a medical debate. Every individual should consult their own doctor.

Q. I just gave birth/I am nursing. Do I have to fast on Yom Kippur?

A. A woman after birth – up to and including the third day since birth – need not fast. Within seven days – consult with a Rov.

After that period of time – she must fast as normal, even though she might be feeling very weak.

The dispensation from fasting is only if it’s potentially a life threatening condition. Therefore, in low risk pregnancy, one should fast regularly unless accompanied by severe headaches, dehydration, dizziness etc.

It’s important to fast even at the expense of sleeping in bed all of Yom Kippur. Where practical, it’s important that husbands remain home instead of going to Shul to help their wife who is fasting.

If however one feels that their condition has deteriorated Chas V’sholom to the extent that it becomes a question of Sakana, then one can break their fast with Shiurim.

One can assess their health situation themselves. If they’re feeling very faint, they should break the fast using Shiurim.

Q. If davening alone without a minyan on Rosh Hashana and Yom Kippur does one say all the Piyutim or does it apply only when davening with a minyan?

A. For someone who davens without a minyan, there is no obligation to say Piyutim, but it is certainly appropriate to do so.

This may not be done during one’s personal Shmoneh Esrei, but may be recited afterwards.

Most Piyutim are said in entirety by both the Chazzan and congregation, and that is how the individual would recite them as well. [Although parts of Piyutim are often marked as “Chazzan” and “Kohol” in the Machzor, this is only in order to highlight which parts the Chazzan says aloud.]

Q. At what point in the pregnancy do you have to use extra chickens for Kaporos?

A. A pregnant woman (after forty days since conception) uses two chickens and one rooster. She uses the plural formula to refer to all the fowl at once:

Regarding a woman who knows she is pregnant with twins – the custom is to use 5 chickens (3 females and 2 males).

Q. Sometimes by Shluchim on Rosh Hashana or Yom Kippur when Chazoras Hashatz is really long, they tell the Chazzan to read it quietly while he gives a speech, and the Chazzan just says the end of the Brachah aloud. It that considered a Brachah Levatalah?

A. In Chazars Hashatz of (Shachris and Mussaf of) Rosh Hashanah and Yom Kippur there are two parts, the Tefilah and the Piyutim/Slichos.

During the Tefilah, the Chazzan must say it out aloud and the Tzibbur must listen. However, during the Piyutim/Slichos etc. the Tzibbur is supposed to be saying along, and do not listen to the Chazan (especially since usually the Chazan says them quietly).

During the time of the Tefilah, it is inappropriate to talk, and the Chazan should Daven in a loud voice. But during the Piyutim, when it is too difficult for the Tzibur to say all of it, (although not preferred) the Rabbi may speak to the Tzibur (about the Piyutim or Tefilah).

Q. Am I allowed to take a caffeine or Tylenol suppository on Yom Kippur?

A. It is permitted but should not be used unless necessary or one is concerned that the fast might have to be broken.

Q. How do I eat and drink on Yom Kippur with Shiurim?

A. If one is required to eat on Yom Kippur due to medical reasons, a Rov should be consulted in advance to receive specific dispensation from fasting. However, in case of a medical emergency where one’s life is in danger, or even if there is a question whether the condition is a medical emergency or not, the patient should be given food or medicine immediately.

They should not attempt to fast against the rabbi’s orders. The same Torah which commands us to fast on Yom Kippur tells us that guarding our health is far more important than fasting on this holy day. Just as a healthy person fulfills a Mitzvah by fasting; an ill person does a Mitzvah by eating.

A person who is required to eat or drink due to illness, but afterwards feels strong enough to fast, must resume fasting.

One who is weak and can only fast if he remains in bed all day, should not attempt to go to Shul or Daven, rather he should fast and remain in bed. Attending Shul and/or Davening are of secondary importance in comparison to the biblical obligation to fast.

Although the eating or drinking on Yom Kippur is forbidden even for tiny amounts, however, when fasting is dangerous one should, whenever possible, eat or drink less than a Shiur (the prescribed amount delineated below) at a time. While it is Biblically forbidden to eat or drink even less than this amount, but such an offense is not punishable by Torah law. One is only “culpable” when eating at least 2/3 of the Talmudic measurement called “K’beitzah”, or drinking at least a mouthful of liquid, within a short period of time.

The Shiur for drinking is half of one mouthful (measured before the fast by filling the mouth and cheeks with liquid, emptying it into a measuring cup, and dividing into half).
If eating is necessary, one may eat up to 30cc (cubic centimeters) at a time. (About the size that fits into a small matchbox).

Ideally, these quantities should be consumed at intervals of at least nine minutes; however, if that is not possible one can be lenient with intervals as short seven, six, or even four minutes. If circumstances require eating and / or drinking even more often, one may be lenient.
Eating and drinking can both be done simultaneously within the same time slot.

When one is required to eat, no Kiddush is recited on Yom Kippur. (This applies even when Yom Kippur falls on Shabbos). Before eating bread one must wash hands as is done throughout the year. There is no need to have two complete Challahs, as is required on all other festivals. There is a difference of opinion whether the holiday Ya’aleh V’yavo is reciting during benching.