« Budapest Prepares For Rosh Hashana Under Threat of COVID-19
Weekly Letter: The Proper Way to Repent » 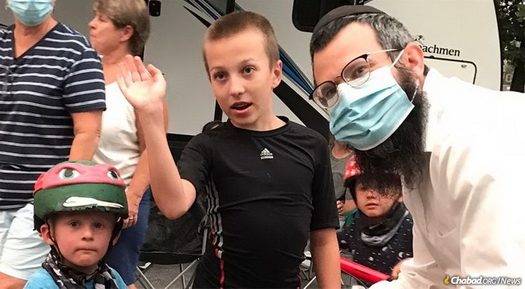 Rivka Williams, a professor at Southern Oregon University, was in the car last week with her two young sons when she saw a police roadblock. Although the sky was clear, she could see fire in the distance. Williams feared that once they left the neighborhood, they wouldn’t be permitted to return. So she drove home, packed up some essentials for her family, and loaded their pets and whatever she could carry into the car. Packing up took just an hour—an hour in which the fire grew exponentially and turned the sky black over South Medford, Ore.

“Of the 224 units in the mobile home park, only two units are still standing,” says Williams. Neither of them are her home. “Thankfully, there were no fatalities, which is good news because we have a lot of homebound elderly, a mix of young families and retirees.”

Williams and her sons are currently staying with family, and they have also gotten a helping hand from Rabbi Avi and Faigy Zwiebel, co-directors of Chabad of Ashland, Ore. “They helped with meals; they are there every day if there’s anything I need,” said Williams, who despite what she’s been through spent last Friday helping the Zwiebels deliver Shabbat packages to other displaced families “During things like this, you don’t even know what to ask for. I need everything.

“The donations that have come into Chabad have helped with grocery money, replacing clothes and gift cards, even gas cards,” she continued. “People don’t think about it, but there are constant costs.”

Up and down the West Coast, Chabad-Lubavitch emissaries have opened their homes, offered hot meals and provided a shoulder to lean on for people who have lost their homes or businesses, been temporarily displaced or otherwise impacted by the more than 80 wildfires raging throughout U.S. states in the West. Hundreds of thousands of acres have burned since mid-August, and 35 people have lost their lives—a number that authorities fear may rise as some people remain missing.

Rabbi Chaim and Aidel Zaklos, co-directors of Chabad of Solano County in Vacaville, Calif., have been trying to help those in their community who have lost homes or have had their properties significantly damaged by a fire that tore through the outskirts of their community.

“During the fire, our Chabad House was an absorption center for people who were evacuated, and needed food or a drink or a place to go,” said the rabbi. “We provided food and snacks to people in evacuation centers, and now we are trying to help those who lost their homes. We are trying to help them find financial support, temporary housing and even basics like toothbrushes.

“We brought them Shabbat packages with flowers and challah to wherever they ended up, even hotels and motels,” he continued, noting that six members of the local Jewish community were among those who have lost their homes.

“The financial loss is not the biggest loss,” said Zaklos. “Many will be compensated by insurance. Rather, it’s the emotional loss. It’s the sentimental value of things, and they need time to grieve. Some people have lived here for 40, 50 years and lost everything—their furniture, their photos.

“One woman told me about losing the table her father gave her. It was the one she sat on as a child doing homework and preparing for her bat mitzvah. Her whole house burned down. The only thing to survive was a menorah,” he recounted.

‘A Huge Migration of People’

Chanie and Rabbi Levi Zirkind, co-directors of Chabad of Central Valley in Fresno, Calif., have opened their 2.5-acre property to local firefighters battling the Creek Fire to be used as a ride-share staging area. They have also increased the available voltage for community members to park their RVs and stay on Chabad’s grounds.

“We’ve dealt with unfortunate situations in the past over here, but we’ve never had anything like this,” said Chanie Zirkind. “This is beyond. We are 50 miles from the fire, but ash is falling from the sky, and every time I FaceTime with people they want to know why I’m sitting in the dark. All you see outside is a gray-brown sky. It’s all smoke.”

She says they are also making Rosh Hashanah care packages for anyone who needs challah, honey or prayer books for the Jewish New Year, which starts on the evening of Sept. 18

In nearby Mammoth Lakes, new Chabad emissaries Rabbi Yisroel and Mushkie Gordon are doing what they can to help, despite having lived in the area for just six months. Neither are native to California—she’s from Connecticut; he’s from Australia—and neither have any experience dealing with forest fires.

“They are saying that there’s not a big chance the fire will get to us, but they are telling people to be ready to go. Most people here have family and friends they can stay with in Los Angeles, but we are worried about those that don’t,” said Mushkie Gordon, adding that they’ve been speaking with emissaries in nearby areas should the need to evacuate arise.

Across the state of Oregon, there has been a “huge migration of people,” says Rabbi Motti Wilhelm of Chabad Center for Jewish Life in Southwest Portland. “All of the emissaries have people in their areas who have needed to evacuate. Everyone is reaching out to those evacuees; the community is really rallying together. One of our teachers at the Maimonides Jewish Day School was in the middle of Zoom class on Thursday when an evacuation order for her area came in.”

Among the evacuees was Baruch Golding of Talent, Ore. That town and nearby Phoenix, Ore., were both decimated by the Almeda Drive fire. According to his son, Michael, Golding lost his home and everything he had in the fire.

“Rabbi [Avi] Zwiebel saw something I posted online about my father’s house, and he immediately contacted me,” said Michael Golding. “He came by with a Shabbat gift and tefillin for my father because his set was lost in the fire. He has just been incredible in such a short amount of time. I couldn’t thank him enough, and he said ‘This is what we do.’

“It was,” he continued, an example of “pure love.”

This article is reprinted with permission from chabad.org

« Budapest Prepares For Rosh Hashana Under Threat of COVID-19
Weekly Letter: The Proper Way to Repent »