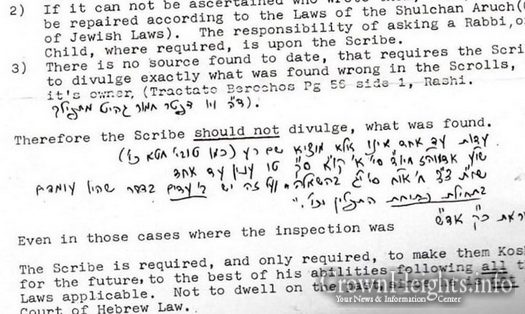 A duch to the Rebbe written by Agudas Kosvei Stam Anash Of Crown Heights has been published publicly for the first time, outlining a meeting where they discussed the halachic ramifications of informing a client of issues found with their Tefillin or Mezzuzos.

The duch covered the topics of a meeting held on the evening of the 20th of Shvat 5743, around thirty seven years ago.

The Agudas Kosvei Stam Anash Of Crown Heights was originally established by Rabbi Zirkind A”H in the 80’s at the request of the Rebbe. The Rebbe gave a brocha to the organization, and received updates in the form of Duchs on the organizations progress. The function of the organization was to defend against other STAM organizations who would criticize Chabad Lubavich STAM activities, and would attempt to invalidate the Alter Rebbe’s Ksav. Another responsibility was to uphold the high standard of STAM in Crown Heights, and was given the mandate from Rabbi Zalmen Shimon Devorkin A”H, who was the morah d’asra of Crown Heights at the time, to give Kaboloh of safrus in Crown Heights.

At this particular meeting in 5743, the issue of being Motzei Laaz, or casting a negative image on another sofer was discussed.

The duch describes the arguments against providing the owner with information on any issues found, and concludes that the sofer “should not divulge what was found.”

The duch points out that there is no source that requires a sofer tell an owner of issues that were discovered, and in a hand written addition to the duch, it notes that telling the owner only acts to be Motzei Laaz, and cast doubt on the original scribe unnecessarily.

The Rebbe accepted the duch, and responded positively to it.