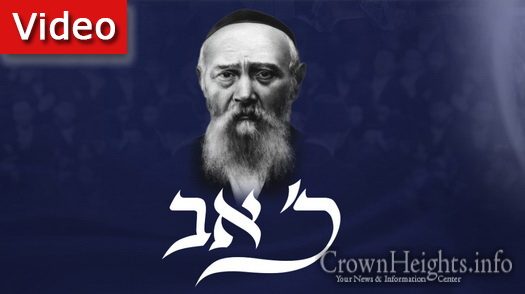 A special studio has been set up in Crown Heights, a short walk from 770, where Shluchim and Rabbonim from across America have gathered to lead this special event.

The special film features a journey through the places where Harav Levi Yitzchok lived, a first-ever visit to his detention cell in the city of Yekaterinoslav, and to the cities in Ukraine where he lived and worked until the fateful night he was arrested for the ‘crime’ of spreading Torah and Chassidus, which led to his exile and premature histalkus in exile in Alma Ata.

This broadcast is designed to envelop the viewer with the uplifting experience of a Farbrengen with the Rebbe, bond you with the life of mesirus nefesh and dedication of the Rebbe’s father. Hear from the panel about his unique approach to learning, and lessons the Rebbe shared with us about his father’s life.

It is well-known that the Rebbe and Rebbetzin Chana demonstrated a special love for Chassidim who named their children Levi Yitzchok. Part of this special video will include a journey through Horav Levi Yitzchok’s life, presented by 11 Chassidim, young and old, who carry his illustrious name.

Interwoven throughout the broadcast will be soulful niggunim sung by the world famous Avraham Fried, who merited to sing for Rebbetzin Chana during his childhood. He will be accompanied by the Gershon Frieshtat band.

This broadcast has been arranged by Fleishman-Peles Productions in conjunction with Merkos 302.

Watch the live broadcast here, or on ChofAv.com