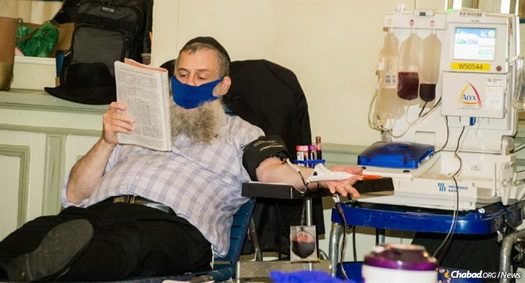 With the participation of the New York Blood Center, the cavernous ballroom of a local wedding hall in Crown Heights transformed into a sophisticated blood center on July 22, complete with doctors, technicians, all the advanced machinery and many volunteers to help people along with signing up and filling out the necessary paperwork. (Photo: Shmulik Serebryanski)

The line of Orthodox Jews in Chassidic dress stretched out the door Wednesday afternoon in the Crown Heights neighborhood of Brooklyn, N.Y. This wasn’t a wedding or a prayer service; these were volunteers coming out in droves to donate plasma to be used in treating patients suffering from the novel coronavirus.

“Now is an extremely critical time to donate plasma because cases are surging throughout the United States at alarming rates. In our experience, convalescent plasma is a life-saver, and no person in need, anywhere, should go without it,” said Dr. Christopher D. Hillyer, president and CEO of New York Blood Center. “Until a vaccine arrives, convalescent plasma is lining up as ‘first-choice therapy’ for this deadly disease.”

With the pandemic spreading in many states, especially in the South, and patients and doctors calling for relief, what would normally be relegated to theoretical discussions in medical trials and hospital bureaucracy has become a growing reality—and it’s all thanks to the tireless activism of three unassuming Jewish businessman with no health-care background at all: Chaim Lebovits and Abba Swiatycki of Monsey, N.Y.; and Mordechai Serle of the Flatbush section of Brooklyn—a shoe salesman, a real estate developer and an attorney, respectively. The blood drive hosted on July 22 in Crown Heights was the climax of their efforts to make this treatment option available to as many people as possible.

Used for more than a century—most notably employed in the 1918 Spanish flu pandemic and again against the H1N1 flu in 2009-10—convalescent plasma contains antibodies developed in a recovered virus patient. The antibodies are extracted and then infused in another patient suffering from that same virus. Such treatments have been used effectively during pandemics for other viruses, but not all, and have yet to be proven effective for COVID-19, although there are reports of a number of successes.

While in normal circumstances, such experimental treatments would be very limited in scope, the FDA’s approval of Early Access Program for convalescent plasma, under the auspices of the prestigious Mayo Clinic in Rochester, Minn., has paved the way to make the technique more widespread and accessible. Previously, hospitals could only gain permission to use convalescent plasma on a case-by-case basis and with various procedural hurdles, and usually only when the patient was critically ill. Past experience shows that it is more likely to be effective at an earlier stage of illness.

Under the EAP, any hospital that complies with Mayo Clinic protocols and appoints a senior investigator to oversee the clinical trials is able to use transfusions of convalescent plasma.

“A threefold challenge remained,” explained Mordy Serle to Chabad.org amid the hustle and bustle of the morning preps for the blood drive in Crown Heights. “One is to secure donors. They must have confirmed antibodies, and be willing to donate their time and blood. Another challenge is securing the appropriate resources to harvest the convalescent plasma. Few hospitals have their own machines, and the 70-minute process of extracting the blood plasma and restoring the donor’s blood, along with the preliminary intake, makes for a lengthy process.

“The third hurdle,” he continued, “is convincing hospitals to join the EAP. Like most large bureaucracies, they are like ‘tanks,’ naturally inclined to stick to standard procedure and avoid experimental treatments that require a nimble approach.”

Behind the leadership of Serle and his colleagues, the Orthodox Jewish community has galvanized around this cause, literally lining up to donate convalescent plasma. The trio of activists have had their hands full these past few months crisscrossing the country making connections between various medical institutions to make the effort a reality.

Tapping into the resources of the New York Blood center—one of the world’s largest blood centers with affiliates across the United States—they secured the capacity to extract hundreds of units of blood plasma a day. Dr. Shmuel Shoham at Johns Hopkins University Medical Center in Baltimore and Dr. Michael Joyner of the Mayo Clinic joined the team, and together with officials from hospitals across the country, the plasma collected to date has been put to good use.

Thus far, the Orthodox Jewish communities in the New York area are the overwhelmingly dominant source of this treatment or, as Joyner expressed it, “the ‘Saudi Arabia’ of supplying plasma.”

Bring the Clinic to Them

Though the New York Blood Center has been making their resources available to the community for this effort, the challenge remains that these facilities are few and far between, presenting a significant barrier to large-scale collection efforts.

The Crown Heights Jewish community was unfortunately hit with the virus hard and early on. The community suffered many losses, and during the height of the pandemic in March and early April, the neighborhood hunkered down in quarantine, hoping for better days ahead.

Devora Hackner, a court reporter there, has been out of a job for several months. Looking for ways to make an impact, she heard about the efforts of the Covid Plasma Initiative and wanted to help. Realizing the potential lying in the hard-hit area, together with the help of a number of other organizations—Ahavas Chesed of Crown Heights, directed by Rabbi Avraham Lider; Refuah Health Care of Monsey, N.Y.; the Bikur Cholim of Lakewood; and others—a new stage in the effort materialized: bringing the clinic to the people.

With the participation of the New York Blood Center, the cavernous ballroom of a local wedding hall in Crown Heights transformed into a sophisticated blood center on July 22, complete with doctors, technicians, all the advanced machinery and many volunteers to help people along with signing up and filling out the necessary paperwork.

Sitting among the frenzy in the popup clinic, Hackner spoke of the volunteers who had rallied around the cause. “For weeks now, hundreds of volunteers have been shopping, picking up medication, monitoring and doing whatever it takes to keep our community healthy. Today’s effort is just another stage in our communal effort to do anything to save a life. The response has been wildly enthusiastic, and we’re honored that so many have come to donate their blood plasma to heal another.”

Sitting in another corner, fielding phone calls and hollers from across the room with other volunteers milling about to pull things together, Lider was an oasis of calm and hope. “This is the third drive we have done in Crown Heights, and people keep on coming back to give more and more. Over 200 people registered in advance, and there are many more walking in,” he said.

The importance of the collection efforts at this point of the global pandemic cannot be overstated. This being the relatively exclusive source of convalescent plasma for the entire country, momentum is crucial. While in March and April the pandemic raged in New York, the past weeks have seen a significant drop in cases, the critically ill and deaths. But far from losing steam, the community has not tired, and convalescent-plasma donations keep rolling in.

“The convalescent plasma collected these weeks is being used in hospitals in Southern states now hit hard by the virus,” said Serle. “As the organization collects more and more samples, they have hopes to create a stockpile in the event that a second wave crashes over the Northeast, G‑d forbid.”

Whatever may come, those who suffered from this virus and are now on the other side of recovery are eager to turn a dark situation into one of healing and hope. As Serle put it to this author sitting on the stretcher donating plasma, “Think about this way: Your convalescent plasma can treat on average three people. There is a very realistic chance that your donation will personally save someone’s life.”

Reprinted with permission from chabad.org