« US Department of Justice To Sue Airmont Over Discrimination Against Orthodox Jews
The “Mezuzah Controversy”, An Interview With Sofer Menachem Moskowitz » 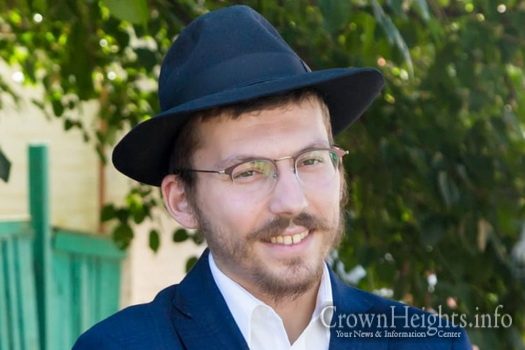 Young Kharkiv Rabbi, Ephraim Kolpak, will begin his work as Chief Rabbi of the Jewish Autonomous Oblast at the end of August, just before the Jewish New Year, Rosh Hashanah

Currently, he is in Moscow, where he receives instructions from the previous Chief Rabbi, Eli Riss, who has moved to the Russian capital to lead the Jewish University’s campus “Otradnoye.”

Rabbi Riss, 30, emigrated to Israel from Birobidzhan when he was young, but after religious schooling in New York and Moscow, he returned to his birthplace as a rabbi in 2012. Last year, he received the prestigious Fiddler on the Roof Award for the development of the Jewish community in the Jewish Autonomous Oblast.

“Thanks to Rabbi Riss, the infrastructure for a full-fledged Jewish life of the local community has already been created in Birobidzhan,” said Rabbi Kolpak. “It is essential for me to improve his achievements. My main task is to work with people. We must bring the maximum number of local Jews closer to Jewish life and traditions of Judaism. All conditions necessary for this goal will be created. “

Rabbi Kolpak, 23-years-old, graduated a yeshiva in Kharkiv and the Kharkiv Economic University, also studied at yeshivas in Kiryat Gat, Moscow, and New York. In Kharkiv, he made online programs for students of his “alma mater” yeshiva and was engaged in the restoration of old Torah scrolls. One of them, which belonged to Kolpak’s great-grandfather, is now in the Kharkiv Choral Synagogue.

In a month, the rabbi will move to Birobidzhan with his wife, the daughter of the chief rabbi of Khabarovsk, Yakov Snetkov.

“Moving to Birobidzhan is an exciting event for me,” says the rabbi. The Jewish Autonomous Oblast is a unique place, and it is one of two official Jewish jurisdictions in the world, the other being Israel. The local Jewish community has tremendous potential for development. With G-d’s help, I will be able to bring more light and joy of the Torah into the life of the community.”

Rabbi Kolpak had already managed to participate in the life of the Jewish community of Birobidzhan before becoming its rabbi. In March 2020, he came to the city for the Purim festival to read Esther’s scroll instead of Rabbi Riss, who caught a cold and temporarily lost his voice.

The Jewish Autonomous Oblast was created in the 1920s in Russia’s Far East, which Soviet authorities carved out in a remote corner of Siberia. Here, Yiddish still enjoys the official status and graces government buildings, outdoor signs, and some street names. With a total population of about 75,000, Birobidzhan is currently home to about 4,000 Jews.

« US Department of Justice To Sue Airmont Over Discrimination Against Orthodox Jews
The “Mezuzah Controversy”, An Interview With Sofer Menachem Moskowitz »