« Former Nazi Guard Apologizes to Holocaust Victims Ahead of Verdict
A Rebbe’s Soldier, A True Chayal » 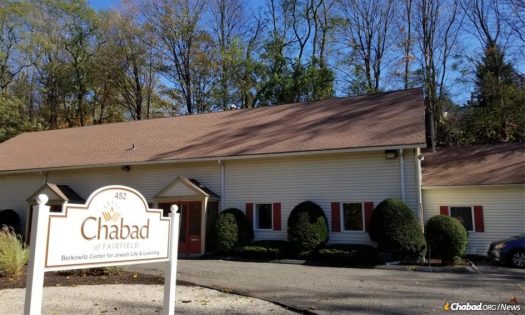 Jewish city dwellers around the nation are accelerating moves to suburban areas like Fairfield, Conn., above.\

Jennie Small has lived on Manhattan’s Upper West Side for seven years. When the coronavirus began to spread in March, she and her children, ages 2 and 3, decamped to her parents’ in Stanford, Conn., for what she thought would be a week or two. Her husband, Josh, stayed in the city working from home, then joined them a few days later.

Now their belongings are in storage, and they’re eying renting options in a community outside of the city, with the suburban village of New Rochelle, N.Y., at the top of the list. “We had visited a few communities before this whole COVID thing. We were thinking we would stay in the city one more year; my husband has to be at work at 7 a.m., we had a decent-sized two-bedroom, and we loved the Chabad preschool,” she says. “The foundation for me is the schools, so I’ve been calling schools and speaking to people to see what’s out there.”

Even some friends who swore that they’d never leave the city are now renting in Westchester, she says. Like most people with young kids, they’re waiting and watching to see about schools opening in the fall, and about when and how communities will eventually reopen.

“We love Chabad of the West Side. To me, it was shul, it was school—it was the whole community and our social life,” she says. The goal going forward, wherever they are, she says, is to find a place where her family can thrive. “I want warmth for my kids to find new friends and enjoy life.”

Around the nation, millions of city dwellers are accelerating moves—some temporary, some permanent—to places outside of urban centers. With remote work on the rise and people setting space as a higher priority, major cities, including New York, are seeing an increase in exits. According to a Pew Research Center survey released earlier this month, some 37 percent in that age bracket has moved, with roughly one in five Americans, about 22 percent, having already relocated due to the pandemic or knowing someone who has. In the 18- to 29-year-old age bracket, that number reaches as high as 37 percent.

In response, Chabad centers around the country say they are ready to help connect new arrivals with whatever Jewish resources they might need in their destinations.

An hour outside of New York, Rabbi Shlame and Miriam Landa, directors of Chabad of Fairfield, Conn., have seen a significant uptick in people reaching out. Calls started coming in after Memorial Day, with people saying they had been living in hotels, waiting to move into area homes or apartments. Call volume has jumped from five to 10 calls a year to 15 calls in two weeks from people who’d moved or were exploring a move. “Usually, people call before they move to find out what the community has to offer. Now people are moving, ‘just got to town’ and calling to see what we have,” says Landa. “The last month it caught me a little bit by surprise.”

More than programming, right now the focus is helping people kasher their homes and find kosher food items they need. Once programs open back up again, he says, they’ll look to welcome their new arrivals into the community. “What’s interesting is there are younger couples, even some individuals, who are looking for somewhere—they drew a circle around New York City and landed in Fairfield.”

For the long term, says the rabbi, he expects more community involvement and to hear from more people who have just come to town but not yet reached out. “We have an incredibly active and warm community, and I think this will only enhance it,” he says.

As workplaces continue to move online, many people are considering migrating not just locally, but to wherever in the world suits them best. Solly Garber has lived in New York City for more than a decade. Now, against the backdrop of the global pandemic, he, his wife and their 16-month-old daughter are seeking more space for their family. He’s working remotely and his wife is going back to school, giving them the flexibility to consider a move to Florida come the end of August.

Chabad has always been a part of his life, and so naturally, they’ve already connected with Chabad in Bal Harbor, a village in the Miami-Dade county as their destination, he explains. “We’ve heard great things about it and the community,” he says. They also happen to love Miami, where they met a decade ago during Passover. “We have good friends who live there,” he says, and it’s a relatively short flight back to his hometown of Lawrence, N.Y. “All of those things made it sound like a great option.”

Rabbi Yosef Wilhelm, co-director of the Chabad Young Professionals of the Upper East Side in New York City, has been watching people leave town since the end of March or April. More and more are going away, and for longer than the usual rush of city-dweller summer travel, he says. With offices closed, those who don’t have to be in the city have decamped for now, he says—or longer. “A lot of people are trying to make decisions,” he says, adding that many of those looking to take up residence elsewhere are young couples or young families whose kids need space to run around. “Some are still deciding.”

Others are waiting to see if their children’s schools will reopen, he adds, while parents have also enrolled in programs at their new destination. “They’ve dropped their leases. A bunch of people have packed up their belongings, put them in storage and said, ‘I’m going to Florida for a year, Jersey for a year, we’ll try it out.’ ”

Wilhelm said he’s been making some introductions, connecting people arriving in new cities to their local Chabad rabbis. But many of those leaving aren’t ready to meet new people yet, given the situation, and are just hunkering down to quarantine in safety.

Jackie (who asked that her last name not be used) says she saw a long future in Manhattan, but now isn’t so sure where her family will land. An Upper East Side resident, she, her husband and their two young children are currently in New Jersey and considering a longer-term move to Long Island.

“We hope to return to the city, but it really depends on where things land with COVID and what the city looks like in a year or two,” she says. “What made living in the city so great was how convenient everything was, but now for kids, it just seems a lot riskier with kids limited to what they can do beyond their apartments.”

Rochel Butman, director of Chabad of Westchester, which serves New Rochelle and the surrounding area, says she’s seeing many houses selling quickly. City-to-suburbs is a common move, especially for young families, but this time is different, she says. She started getting more calls in June, which is uncommon, especially with regard to the preschool. “People are moving, people are calling for schools to ask about the community—I see a big move from the city,” she says. “There are always people moving from the city, but there became many more in the last couple of months.”

She’s taking a few calls a week now, as opposed to the two or three she’d usually get at the last minute about enrolling people’s kids, adding that they’ll probably have nearly a dozen extra sign-ups before the summer is out. “It’s not the usual situation,” she says.

And while it’ll likely mean growth for the Chabad center as it expands programming to meet the needs of new arrivals along with the current community, she says she wishes it were happening under better conditions. “I’m happy to be here for people but because of the circumstances, I can’t say it’s exciting,” she acknowledges. “It’s a serious time, and we’re here to help people.”

This article has been reposted with permission from chabad.org

« Former Nazi Guard Apologizes to Holocaust Victims Ahead of Verdict
A Rebbe’s Soldier, A True Chayal »