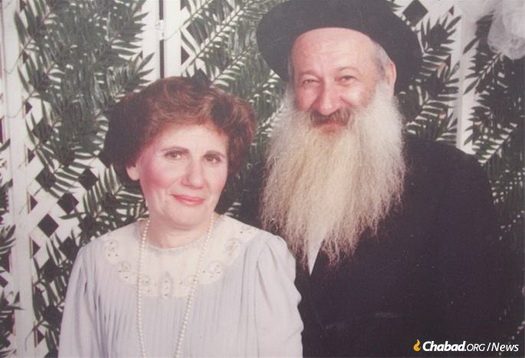 Rabbi Avraham and Rivkah Karp were pillars of the Montreal Jewish community for decades.

Whether it was risking her life to bring food to hungry students at an underground yeshivah in the Soviet Union or standing by her husband as he taught thousands of students in Canada who were thirsty for the Torah’s wisdom, Mrs. Rivkah Karp, 90, who passed away April 4, was a stalwart for Jewish education and tending to the needs of others.

Born in 1929 in the Russian city of Voronezh, young Riva, as she was known, lived a happy and relatively comfortable lifestyle in the home of her parents, Zev Avraham and Shaina Chaya Slavin. A family of wealthy merchants for generations, they readily shared their fortune with others, so much so that the very name “Slavin” was synonymous with the virtue of hachnasat orchim—“hosting guests.”

Her idyllic childhood shattered by increasing Soviet religious and economic persecution, Rivkah and her family, along with many other Lubavitch Chassidim at the time, fled to the remote city of Samarkand, Uzbekistan, to gain somewhat of a reprieve from the tentacles of repression.

Life in Samarkand was difficult, as even there, the ever-watchful eye of the Soviet Union was alive and well. Undeterred, the Chassidim there organized underground venues of Jewish life: schools and yeshivahs for the youth, tiny synagogues, clandestine mikvahs and other such dangerous operations.

It was in this climate that young Rivkah was commissioned for her first act of community service, conveniently using her image as an innocent young girl as a cover to secretly deliver food to starving yeshivah students stuck in their basement, unable to come out for fear of being caught by the Soviet authorities. Her guise notwithstanding, the act was highly dangerous, yet she repeatedly risked her life to carry it through.

After the war years, the Slavin family eventually made their way to Paris. Rabbi Avraham Karp, a Polish native, had spent his war years in Siberia, and he, too, made his way to Paris, where he met Rivkah. They were married in 1951 in the festive month of Tishrei.

‘Seeking Out Needs That Others Overlooked’

Life eventually brought the young Karp family to Montreal, Canada, where they spent the rest of their lives as anchors of the Chabad and larger Jewish community. Avraham found a job teaching in a small yeshivah affiliated with the Klausenberg Chassidim, where he was still referred to as the “The Lubavitcher.”

His first job in the New World was teaching Torah—and he never looked back. Switching to the Chabad Yeshivah in Montreal, Avraham Karp’s Torah instruction did not remain in the school hall, as he started a Daf Yomi class in his house that reached up to 60 participants every night.

Crammed into the small living room, these seekers of G‑d leafed through a full page of Talmud every evening under the skilled guidance of Avraham Karp. Delighted and thrilled to be hosting such an abundance of Torah study, Rivkah stood by his side for many years, ever the gracious hostess, setting the class up nightly and plying the participants with tea and sweets.

Rabbi Avraham Karp’s Daf Yomi classes were recorded, and today have been used to teach thousands. They are well-known in the Torah-study world as clear, concise and mixed with just the right touch of entertainment to make covering a full page of complex Talmud every day achievable.

“Helping people and seeking out needs that others overlooked was literally my mother’s hobby,” her son, Yanki, a longtime teacher himself, told Chabad.org. “She always looked out for others and ensured that they were taken care of.

“When her mother passed, what was she concerned with on the day of the funeral? That her mother’s hospital mate, whom she had befriended, had warm soup that she personally sent. That was my mother.”

Her passion and love for Judaism was legendary. Her daughter, Rochel Lustig notes that, “as a young girl in Soviet Russia, my mother didn’t even receive a formal Jewish education; dedication to Judaism was simply ingrained in her very being.”

Indeed, her profoundest joy was to sit surrounded by her children, grandchildren and great-grandchildren, rocking lightly as she whispered the sweet words of Psalms that she held so close to her heart.