« Weekly Letter: Are Women in “Orthodox” Judaism in an Inferior Position?
Last Chance to Make Your Mark » 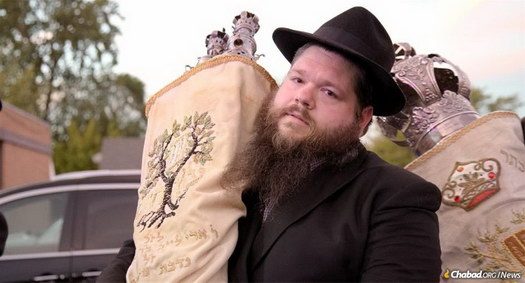 Rabbi Motti Kopman at the dedication of a new Torah scroll his family had donated to the synagogue. (Photo: Alex Kleyman)

Rabbi Motti Kopman dedicated his life to two things—spreading joy and helping others, say his family and many friends. In fact, the young rabbi’s reputation for being ready to serve anyone at a moment’s notice was so widespread that he would often receive phone calls at his home in Buffalo, N.Y., in the middle of the night from strangers in need of help. “He would go to them right away,” said his brother-in-law, Shimon Kaduri, “helping people with no limitation or reason.”

Kopman passed away on April 12 at the age of 34 from complications due to cancer and COVID-19, leaving behind his wife, Chana, and five young children.

Kopman was born in 1985 in Jerusalem, the fourth of nine children to Moshe and Gila Kopman. He was raised and educated in Israel, but immigrated to Buffalo, N.Y., seven years ago to serve as spiritual leader and rabbi to a small community of Israeli expats living there. “He was very instrumental in bringing spirituality” and joy to the hard-working group, says Rabbi Moshe Gurary of Chabad-Lubavitch of Buffalo, a longtime friend and colleague of Kopman’s.

Right away, Kopman started a small synagogue in the neighborhood and played every role there—Torah reader, prayer leader, caretaker and rabbi to the congregation, all while establishing a successful real estate business. “He was a man of doing,“ said Kaduri. “Everyone loved doing business with him,” noting that Kopman was not only available to give spiritual advice, but also ready to share his business know-how, even with potential competitors.

Kopman brought such a sense of unity and enthusiasm for Judaism and the Jewish community that eventually many of his congregants became more impassioned in their observance and heeded his advice to join a bigger and more vibrant Jewish neighborhood across town. And when they did, the Kopmans moved right along with them. The rabbi immediately made himself as indispensable to his new community as he was to the previous one.

He not only donated all the money to buy a new roof for the synagogue, the Knesset Center of Buffalo, but even paid for his own staff of contractors to install it during his normal business hours. And yet, Gurary and Kaduri both said, Kopman was so humble that he never publicized his generosity in any way. “Nobody knew that he was the one who did it,” said Kaduri.

‘He Had Such a Good Connection With People’

Even as a small boy, Rabbi Kopman had an almost magical ability to bring people together and connect to each person he met, said his family members. His father, Moshe, tells of a year that one of Motti’s brothers had spent weeks meticulously building and decorating a menorah.

“Motti, on the other hand, got all his brothers and sisters together and made an assembly line,” Kopman reminisced. In a few short hours—each sibling responsible for a particular element—they had produced eight or nine menorahs. He would also organize collaborative Sukkah-building events and make Shabbat parties for all the other kids in his building, even when different sets of parents were feuding with one another. “All the kids got along with Motti,” said Kopman.

His charisma continued to grow as he did. “He had such a good connection with people,” said Kaduri. “The first time I met him over the phone, I felt so comfortable with him. And when we met in person, he greeted me with a hug, as if we’d known each other our whole lives.”

‘He Had a Beautiful Voice’

Kopman’s devotion to joy was neither precious nor glib. It came from a deep well of spirituality and faith. “The Rebbe [Rabbi Menachem M. Schneerson, of righteous memory] was his source of inspiration,” said Gurary.

Kopman was feeling very ill in the days leading up to this past Rosh Hashanah. Despite his pain and fatigue, he led the Rosh Hashanah prayers at Chabad at Buffalo. “He had a beautiful voice,” said Gurary. “It still rings in my ears, … him singing “Unetaneh Tokef.”

After nearly exhausting himself during the hours-long service, Kopman still managed to go with Gurary to the campus of the University at Buffalo and blow the shofar for Jewish students who hadn’t heard it yet. “He had to lie down all the next day,” said Gurary. A few days later, just after Yom Kippur, Kopman was diagnosed with lymphoma and almost immediately began chemotherapy treatments.

His brother, Rabbi Yitzchok Kopman, called him from Belarus in the hours leading up to Simchat Torah. “What are you going to do?” he asked. “Simchat Torah is called the season of our joy,” replied Motti. “I am going to be the joy.”

When the holiday arrived, he was so weak from the disease and the chemo treatments that he could barely walk. So Kopman asked his friends to push him to the synagogue for the Simchat Torah festivities. Inside, as the men were dancing in circles, they opened up to allow the rabbi to come into the center. With all the strength he could muster, he pulled himself to his feet and began to dance. The whole place lit up, his father said. “He made the whole Simchat Torah for the whole shul.”

Kopman went home to sleep. And yet, as always, he was soon called from his bed that night to help pop a dislocated shoulder back into place for a young neighbor.

‘And You Will Go Out in Joy’

The chemotherapy treatments were successful, and by February 2020, it seemed that Kopman had beaten lymphoma. But soon, he started having wrenching headaches. In trying to discover the sources of the pain, doctors realized that he had a new type of cancer. While being treated, he contracted COVID-19.

Despite it all, he told his brother that he was going to drink a fifth cup of wine at the Passover seder—“for joy.”

The first night of Passover was Wednesday. By Friday, he had to be ventilated. As the ambulance took him to the hospital, the sun set. The EMT sitting beside Kopman noted the change in the sky and said to him, “Rabbi, it’s Shabbat now.” And Kopman began singing “Lecha Dodi” with the little breath that remained in him.

Once at the hospital, just before the doctors administered the anesthesia that precedes intubation, Kopman turned to his brother-in-law and spoke what would be his last words—a quote from the prophet Isaiah. “Ki vesimchah tetzeiu,” he said. “And you will go out in joy.”

Donations to help Rabbi Kopman’s family can be made here. Those with stories, memories or videos of the rabbi are welcome to share them with Shimon Kaduri, who is collecting them for a memorial. He can be reached at shimen770@gmail.com.

« Weekly Letter: Are Women in “Orthodox” Judaism in an Inferior Position?
Last Chance to Make Your Mark »