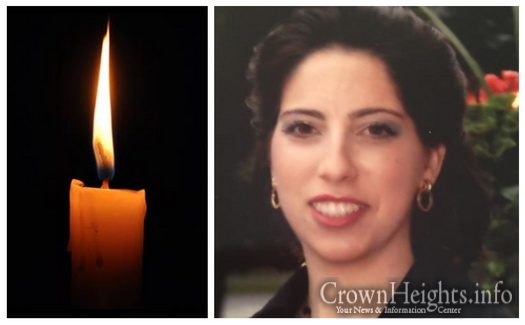 In the book of Exodus, we are first introduced to the prophetess Miriam, sister of Moses. There, the Torah—referring to her and her mother as Shifrah and Puah—tells us of their self-sacrifice to defy Pharaoh’s decree to murder all Jewish newborn boys. Instead, they assisted the childbearing mothers, ensuring the continuance of the Jewish nation.

Miriam Shmueli, who passed away on May 2 after battling an autoimmune disease, carried the name of the prophetess and followed in her ways, say friends and family. Like her namesake, she did her utmost to help women in childbirth, acting as a doula in high-risk pregnancies and then supporting the new mothers as they recovered.

But her kindness wasn’t only extended to birthing mothers. After her passing, her family was told innumerable stories of her day-to-day kindness, of her care, compassion and warmth that she bestowed on everyone.

Menucha Lapidus, a childhood acquaintance, recalled being overwhelmed after her family moved to the Crown Heights neighborhood of Brooklyn, N.Y. Miriam, she says, went out of her way to make her comfortable. “I was 11 years old when my family moved to Crown Heights. I was a shy child, and it was overwhelming for me to join such a large and different type of community. Miriam and I shared the bus ride to school every day. She noticed my loneliness and always went out of her way to make me feel included. She would save a seat for me on the bus so that I could sit next to her. I remember feeling so happy and comforted when she was around.”

Many others shared similar sentiments.

“She was a very confident and bright young woman with a straightforward and logical mind. When something needed to be done she would set out to act, and indeed, she accomplished so much,” said Seligson. “It is hard to keep track of all the programs she initiated.”

Born a week before Passover, Shmueli’s parents chose to give her the name Miriam—one of the central figures in the story of the Exodus, a choice that turned out to profoundly affect the trajectory of her life.

As a young girl growing up in Crown Heights, Shmueli learned in the Beis Rivkah Schools, first in the elementary division and then in high school. After graduating, she continued her studies in seminary in the town of Kfar Chabad, the headquarters of Chabad in Israel. Having completed her studies, Shmueli then returned to Crown Heights, where she set out to translate her years of study into action.

For the next few years, she served as a teacher in girls’ schools in Crown Heights, including at her alma mater, Beis Rivkah. For a period of time, she monitored girls who had received detention, staying with them after school hours to complete their assignments. As was so typical to her, Shmueli saw in that time an opportunity rather than a punishment. She would pair students according to their academic level and have them learn or complete their homework. Thus, detention became a time of productive learning and even a sort of after-school assistance program. Girls recall looking forward to being told to stay after school, giving them the chance to spend time in Shmueli’s “class.”

Nevertheless, Shmueli felt her calling was elsewhere. Inspired by her namesake, the biblical prophetess Miriam, she studied to become a doula, focusing on high risk cases where she felt she could be of the most help. She sought to make each birth a spiritual experience, connecting Chassidic teachings to each step in the process. Knowing that Jewish writing teaches that in the messianic age birth will be painless, she strove to simulate the upcoming times by utilizing the hypnobirthing method.

For her, being a doula wasn’t just another way to get a paycheck. She connected with the mothers, calming their fears and reassuring them as they brought a new soul into this world. After the births as well, although her official position was over, she made sure that the mothers had the meals and support they needed. Many felt so grateful for her role in their child’s birth that they kept in touch with her for long periods of time after they left the hospital, updating her on the progress of the child she helped deliver.

With her natural sensitivity, Shmueli realized that not every woman who needed her could afford the cost of payment. After her passing, as her family read the many “thank you” letters she had received, they found a large number of undeposited checks. Shmueli knew that when she refused a check, many of the givers would feel deep shame that their financial strain was noticed. Instead, when discerning financial stress, she would accept the check proffered but not deposit it.

Prayer also played an integral part in Shmueli’s life. Crown Heights women knew that on Shabbat and holidays, they would see her praying in the women’s section at Chabad World Headquarters at 770 Eastern Parkway. Alongside her own devoted prayers, she also had her eye out for others. In recent years, she instituted a program for girls praying in 770, where she taught them the meaning of the timeless words of the prayers and encouraged them to pray together with the minyan. The program was so successful that schools in the community started using the same method for their pupils.

She also founded and ran a weekly class for neighborhood girls, studying the teachings of the Rebbe about the upcoming messianic age. First hosted in a private house, the class quickly became so popular that it had to move to a nearby synagogue. For more than four years, nearly 80 girls joined the class every week, all thanks to Miriam’s tireless efforts. On Friday nights, she was frequently busy as well, catering a Shabbat meal for members of the community that had no family to fend for them.

When it came to spreading the light of Judaism, Shmueli again didn’t forget those who hadn’t had the fortune to receive proper Jewish education. On every Friday of the year, she would spend part of her time handing out Shabbat candles to women who didn’t yet light them. “For Miriam, all these projects and undertakings were simply self-understood,” her family said. “To her, this was the way every follower of the Rebbe should behave, caring for every Jew just like the Rebbe did.”

During the last period of time, Shmueli was in the prime of her life. She was the process of establishing a clinic for new mothers to provide care and services such as acupuncture and nutrition consultation, all the while continuing her other activities and taking on new projects. But all that ground to a halt when she contracted an autoimmune disease.

For months, she battled the illness, fighting it with her trademark passion. With her passing, the Crown Heights and worldwide Chabad community, already mourning the far too many victims of COVID-19, was plunged in grief once again.

“Her heart was wide, open and available,” said a recent acquaintance. “Miriam will be greatly missed and always remembered.”