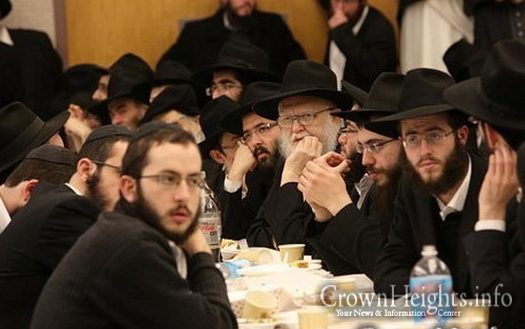 I was heartbroken to read and hear about the petirah of your beloved father Reb Moshe ע”ה. It’s been a few years since I saw him as visits to 770 from South Africa are always short and quick, but I knew he wasn’t well, and now hearing that his Neshomo is back in the Yeshiva shel Maaloh, my many years of memories with and of him are all suddenly coming back.

While the context of my friendship with each of you varies in time and place, the common denominator is that the presence of your dear father ע”ה was a very special part of it. From literally the day I landed in אדמת קודש אוק פארק his piercing eyes, warm smile, and sharp sense of humour became a part of every Shalom Aleichem in the warm, tight firm grip of his large hands holding mine (first a pinky, and then the whole hand ;).

Those were the young and perhaps wild years of my גירסא דינקותא where, more often than perhaps I wish, I would get caught up in the חיצוניות of what I was learning, seeing and experiencing, and taking on, which didn’t necessarily always work in favour of a true appreciation of ענינה של תורת החסידות and what it was really all about.

I’ll be very honest. From the six wonderful years that I spent in Detroit I have zero recollection of your father making Kiddush on Mashkeh, dancing on a table, or rebuking the masses about one or another sacred value of Chassidus that the world desperately needed to hear. Zero. But from the age of 15 to 23 I do have a clear consistent image of his towering figure expressing a pure undiluted form of עבד אברהם אנוכי that today, when his Neshomo is looking at me from a different space, I still feel it the same. The basics, the basics of being a person, a husband, a father, a friend, a Yid, a Chossid, a Shliach of the Rebbe, were exemplified by him in a way that drew zero attention, and I mean zero, to him; it was all about what he was reflecting.

It’s a rare quality to be big, great or tall, and yet not make the others around you feel small. But your father did that for me. In many ways. Simply bigashmiyus the way he would approach you didn’t have that daunting feeling that tall people often do, but that was just a reflection of his approach to life bichlal. Although he was an Odom Godol in every sense of the word, his Gadlus was strictly between him and the Aibeshter, between him and his Mishalayach. He wasn’t “humble” in the sense that everyone knew he was so great but he didn’t make a big deal out of it. No, he really really made the 15 year old Oshy Deren, wet behind the ears in the new world of Nine Mile Road, feel like a friend. An equal. Just the same. He would joke with me about whatever he saw or felt was where I was. But somehow the conversation always ended up with a story of an Elterh Chossid, a Vort from the Rebbe, or a Hanocho in Darkei Hachassidus which he lived – never taught.

Did I have an inkling that this is someone who has a Bekiyus in Chassidus that outshone probably most if not all of the great Mashpi’im that I came across through my years? Did I ever feel (even while he was giving me a sharf vertel or a nudge in the right direction) that this was a person for whom the pleasures of Olam Hazeh meant absolutely nothing and I mean nothing? When watching him stride down Cloverlawn with your brother’s hand firmly in his did I get a sense that this was a Baal Mesiras Nefesh whose love for another Yid, whether his own child or a little Bochur he was meeting for the first time, meant that he would always put other people’s needs before his? No. None of the above.

If I have any regret, it’s that it was only when I came back to Detroit after Shlichus etc, a little older and perhaps a little smarter, did our conversations develop, and my ability to see what and who was in front of me, became clearer. By then, with the “Dovid Ben Nochum” building being the new Ground Zero, my time in the “Mishkan Israel” building was much more limited and interactions not as often, but I do remember that when we did get a chance to see each other I was seeing a side of him that, while he never showed, I knew it was a treasure to see and receive.

But in a certain sense, it was during those younger years, when I saw him more naively, through the simplicity that he projected, where I think he made the deepest impression on me. Not through discussing the finer point of the Rebbe’s Maareh Makom on the Frierdikeh Rebbe’s Maamer or the veracity of an alleged Yechidus that transpired in תשי”ד. Yes, davka in the unvarnished pshitus of Reb Moshe Zaklikovsky ע”ה do I feel like I got the most transparent view of this Heilikeh Neshomo, and the Pshitus HoAtzmus that it reflected. And that I hope I can continue to learn from and in some small way, try to reflect as well.

May each of you find Nechomo secure in the knowledge that – as much as the world never gave your father the recognition and respect that his tremendous gadlus should have required us to give (yes, as much we know as he would run away from any such thought of course) – the truth of his Heilikeit (in the life that he lived himself, and the impact it had and the influence it continues to have on the thousands who were blessed to meet and know him, perhaps even more so, to this day) will be a Zchus for his Neshomo Limaala, and Bezh”y for each and every one of you and your entire Mishpochos, Gezunterheit un Freilicherheit, to carry on the light of his Shlichus in this world that the Rebbe gave him, and through him to each of you.