« Here’s My Story: Making the World a Smaller Place
After DeBlasio Singles Out Orthodox Jews on Twitter, NYPD Goes on Ticketing Binge In Williamsburg » 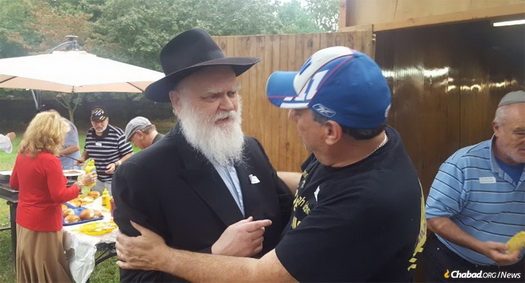 Everything mattered to Rabbi Moshe Zaklikofsky, who passed away on April 25 at the age of 72.

Everything mattered to Rabbi Moshe Zaklikofsky, who passed away on April 25 at the age of 72.

A brilliant scholar with an encyclopedic knowledge of Judaic texts, he compiled and took part in preparing hundreds of volumes of Chassidic texts for publication in the course of more than 50 years. Despite his tremendous knowledge, no detail was too small and no person insignificant.

The consummate professional, as an editor he noticed every reference, every letter and punctuation mark, and every footnote. And as a longtime Chabad-Lubavitch emissary to Michigan, he took special notice of those whom others overlooked—the poor, the incarcerated and the hospitalized.

By age 22, he was already tasked with editing and preparing for print for the first time ever Samach Vav,a seminal work of Chassidic thought combining a series of 66 Chassidic discourses penned by the Rebbe Rashab, the fifth Rebbe of Chabad, beginning in 1906. Zaklikofsky worked directly off photocopies of the Rebbe Rashab’s manuscripts, which the Rebbe—Rabbi Menachem M. Schneerson, of righteous memory—had made and brought with him from war-torn Europe.

In time, he became the editorial expert and final proofreader for the books being published with the edited talks of the Rebbe. “When my father was proofreading the galleys, he was in a different world,” said his son, Rabbi Eliezer Zaklikovsky, director of the Chabad Jewish Center in Monroe, N.J. “You could see on his face how seriously he took his responsibility and how special this was for him. He loved being part of the Rebbe’s work, and he relished producing a clean, dignified typo-free copy for the entire world to study.”

But his scholarship never got to his head. His humility and constant aversion to public attention was legendary. In a private audience with the Rebbe, he confided that he was nervous about composing entries in the Sefer HaArachim, the encyclopedia of Chabad Chassidic thought. Though his work would later be edited by Rabbi Yoel Kahn, the senior scholar leading the project, Moshe feared his work wouldn’t be up to par. “Do not fear,” the Rebbe lovingly replied. “When one works on behalf of the community, zechut harabim misayato, the merit of the community assists and guides him.”

These words put him at ease and became life-long advice for him.

A Lifetime of Immersion in Torah

Moshe Zaklikofsky was born on July 9, 1947, the eldest of three children born to Holocaust survivors Dovid Henoch and Mattil Zaklikofsky. The Zaklikofskys were then living in the DP camp in Pocking, Germany, which had a sizable group of Chabad Chassidim, most of whom had escaped the Soviet Union.

In 1951, the family emigrated to New York and settled in Brownsville, a declining Brooklyn neighborhood within walking distance of Crown Heights. Already as a child, Moshe would walk with his father to attend the Rebbe’s Shabbat afternoon farbrengens. In 1960, with the Rebbe’s financial assistance, they purchased a home just a few blocks from Lubavitch World Headquarters at 770 Eastern Parkway.

Moshe revered the Rebbe and recoiled at the thought of causing him discomfort or disappointment. When he was told that the Rebbe had mentioned to Dovid Henoch that his eldest son could do better in his Torah study, the young scholar buckled down and began learning entire Talmudic tractates and chapters of Jewish law with legendary assiduousness. Due to his tremendous sensitivity to the Rebbe, that brief mention served as the launching pad for a lifetime of immersion in Torah and an insatiable thirst for the study of Chassidic teachings.

Gifted with an exceptional memory, he was awarded certificates for his accomplishments during his teenage years, though kept them a secret from his parents and siblings. As far as he was concerned, action mattered more than words; the limelight was worth nothing at all.

During breaks from learning, he would often rush the mile from the Lubavitch high school, then located on the corner of Bedford and Dean streets, to participate in 3:15 p.m. Minchah services with the Rebbe at 770.

“Sometimes, we’d be a few minutes late coming back to class,” recalled his childhood friend, Rabbi Sholom Tenenbaum. “With his long legs, he was always a few paces ahead of me. When we showed up late, the teacher would give us a small fine. But off the record, I’m pretty sure they were pleased with our activity of choice in our free time, rather than a game of stickball.”

With a keen eye for detail, while still a teen in the early 1960s, he began adding footnotes to and proofreading the first published leaflets of the Rebbe’s edited talks, quickly earning the respect and admiration of the editorial team. Before long, he was invited to take an active role. He soon began working with the secretary of the Rebbe, Rabbi Leibel Groner, who was responsible at the time for the publication of many Chassidic works by the Kehot Publication Society.

Having developed an encyclopedic knowledge of Chassidic literature and wider Torah sources, he became the go-to person for anyone publishing Chassidic writings looking to verify a reference or confirm an obscure Talmudic passage.

In 1971, he married Shaindel Rendler. The couple soon moved to Portland, Maine, where the young rabbi taught at the city’s small Jewish day school.

In 1975, they relocated to suburban Detroit, where he became administrator of Lubavitch Foundation, the umbrella organization of Chabad institutions in Michigan.

Zaklikofsky’s work included a variety of disparate duties, ranging from preparing educational material and visiting prisons and hospitals to overseeing cemeteries, running the Chabad bookstore and fundraising. But to him, they all fit under a single rubric: doing whatever he could to assist others and foster Jewish life.

With this worldview, it made perfect sense to spend an entire Purim on the road just to visit Jewish inmates in a distant prison. And there was no reason not to spend days and nights to make sure that the charts of candle-lighting times were perfectly accurate for every place a Jewish person could possibly live in the Great Lake State.

“You could see how happy he was as he got ready to visit the hospitals and encourage people,” said his longtime colleague at Lubavitch Foundation, Rabbi Yosef Kesselman. “With just a few words, he would make people feel good, like someone was looking out for them. That was his pleasure.”

Patient and Helpful to All

An affable man who shied away from publicity, he became a mentor to many who embraced Judaism later in life. They knew that he would patiently answer their questions and guide them through any area of Jewish communal or ritual life they would find puzzling.

His approachable demeanor made him an address for hundreds of out-of-town students studying at Lubavitch schools in Detroit. “Rabbi Z’s office” served as an oasis where one could find an accepting and smiling adult who could be counted on for a word of encouragement, a compliment or practical assistance. “The conversation would always begin the same way: ‘How are your parents?’” remembered Rabbi Yoel Gancz, a former student in the high school. And then he’d provide a listening ear for whatever your life’s challenges of that day, as though he had no other care in the world. And if he didn’t know your parents when you arrived in town, he knew them by the time you left.”

“Rabbi Z., as he was lovingly called, had a genuine friendship. He saw no barriers,” agreed Rabbi Berl Goldman, today a Chabad emissary in Gainesville, Fla.

The local Detroit community received the same treatment. “If someone needed a ride or if they needed a resource to get their washing machine fixed, who would they turn to? Rabbi Z,” attests Kesselman. “Everyone felt comfortable with him and knew that he would be happy to help them.”

He will be sorely missed by his family—many of whom serve Chabad as emissaries around the country—by the greater Detroit Jewish community, as well as the editorial teams at Chabad headquarters and the many hundreds of Chabad rabbis around the world who felt honored to call him a friend, mentor and confidant.

He is also survived by his brother, Rabbi Avrohom Zaklikowski, and sister, Miriam Muskal, both of Brooklyn, N.Y.

« Here’s My Story: Making the World a Smaller Place
After DeBlasio Singles Out Orthodox Jews on Twitter, NYPD Goes on Ticketing Binge In Williamsburg »