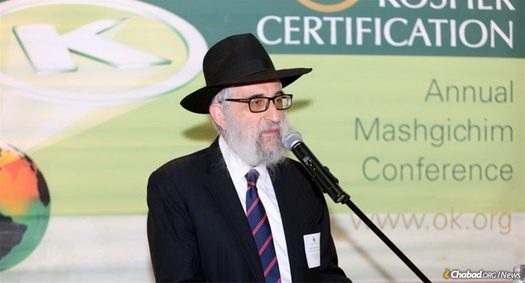 Rabbi Don Yoel Levy, known as a brilliant scholar, outstanding organizer and consummate professional, speaks at a conference at the OK Labs.

Rabbi Don Yoel Levy, head of one of the world’s largest kosher certifying agencies, passed away on April 16, the last day of Passover. He was 72 years old and succumbed to the coronavirus.

A brilliant scholar, outstanding organizer and consummate professional, Rabbi Levy directed OK Labs, or Organized Kashrus, which he inherited from his father as a relatively small operation and transformed into a global standard-bearer for the kosher world that certifies over 500,000 products.

Already from a young age, Rabbi Levy demonstrated a deep devotion to Torah study and its principles, gaining a reputation as a scholar. Far from just a student of Torah, he strived to be a fierce advocate for its values and allow it to guide his every move. Those who came in contact with Rabbi Levy recognized him as someone who was committed to his principles, and as anyone in the kosher world can testify, regardless of the consequences—financial or otherwise—he never compromised on them. For that, he was universally respected.

Don Yoel Levy was born in 1947 to his parents, Rabbi Berel and Thelma Levy, who were then living in Elizabeth, N.J., due to Rabbi Berel’s involvement with Torah Umesorah, the National Society for Hebrew Day Schools. As the son of an Orthodox rabbi in a town that didn’t feature many religious Jews, from early childhood, Don Yoel was used to being different, and was armed with a foundation built by his fiercely devout parents.

Already in those early days, young Don Yoel was taught by his kosher-supervising father that not everything is as it seems. Though a simple candy’s ingredients can reveal that it contains no lard, that is far too little information to decipher whether or not the product is actually kosher. While “vegetable fat” can seem innocuous enough, his father taught him that many such products were made on equipment that produced meat fats—a very unkosher product, to say the least.

As he matured into a budding young scholar, Don Yoel enrolled in the Philadelphia Talmudical Yeshiva, and later, at the Lubavitch yeshivah in Kfar Chabad, Israel, where he revelled in the opportunity to immerse himself in the study of the “word of G‑d,” day and night.

“He was a world-class Torah scholar,” said Rabbi Ari Senter, kashrus administrator of the Kof-K, a colleague and close friend of Levy’s.

“He was an intense masmid, a scholar and a master of Torah,” remarked his son-in-law, Rabbi Yitzchak Hanoka, the senior rabbinic coordinator of the OK and director of the Tri-State and New England Region. Rabbi Levy received smichah, rabbinical ordination, from three leading Jewish figures, among them Rabbi Moshe Feinstein, a leading halachic authority of the 20th century.

In 1970, Rabbi Levy married Malka Deutsch of Jerusalem. Under the guidance of the Rebbe—Rabbi Menachem M. Schneerson, of righteous memory—to focus on his studies, the young couple settled in the Nachalas Har Chabad neighborhood of Kiryat Malachi, Israel, where Rabbi Levy continued to pursue his Jewish studies.

Joining the World of Kashrut

Rabbi Berel Levy’s OK was growing. Recognizing that his son, Rabbi Don Yoel, would be an asset to the organization, the senior Rabbi Levy made plans to recruit him. To his chagrin, whenever he asked the Rebbe whether he should invite his son to return to the United States and join him in his work, the Rebbe would always reply: “If he is learning, why take him away from his studies?”

Eventually, with the operation growing and seeing no other alternative, the elder Levy asked the Rebbe if he could bring a partner into the OK to assist him. At that point, the Rebbe instructed him to bring Rabbi Don Yoel into the “business.”

The Rebbe was by this time regularly dispatching emissaries (shluchim) to all corners of the globe, and Rabbi Don Yoel very much wanted to join the movement. He requested a personal audience with the Rebbe during which he could ask the Rebbe about it directly. During this life-changing meeting that followed, the Rebbe told him that promoting kosher is also spreading Judaism.

“My father-in-law viewed his position as a shlichut, a tremendous platform to influence the world in a positive and Torah-based way,” said Hanoka. “The Rebbe instructed him to ‘go into the world of kosher and make repairs’—and that’s exactly what he did.”

In 1987, upon the untimely passing of Rabbi Berel Levy, Rabbi Don Yoel Levy assumed leadership of the OK Kosher Certification and guided it to the next level.

Over the course of the many years of his position, Rabbi Levy’s name became known to anyone in the industry. “He was a true pioneer, way ahead of his time, revolutionizing the kosher world,” said Senter. “He reinvested in kosher, always looking for ways to bring in new technology, to enhance oversight—in short, whatever was best for kosher.

“He was a consummate talmid chacham [scholarly] kashrus professional; if you are in the kosher industry, you know who Rabbi Don Yoel Levy was.”

His principled stance and forthrightness were legendary both with the companies the organization oversees, as well as the entire industry of kashrut organizations. As the head of one of the largest kosher organizations in the world, an executive member of the AKO (Association of Kashrut Organizations) and a senior leader with decades of experience, Rabbi Don Yoel was known to speak his mind and make sure kosher standards were never compromised in any way, a charge he received directly from the Rebbe. Many a colleague would testify to hearing firm and resolute opinions from Rabbi Levy when no one else had the courage to do so, and regardless of whether or not the recipient loved hearing it, there wasn’t anyone in the industry who didn’t respect him for it.

“Rabbi Levy’s singular goal was to make the world kosher without compromise,” explained Rabbi Chaim Fogelman, Rabbi Levy’s son-in-law and the OK’s director of public relations . “If he risked losing a large contract for even the minutest detail, he wouldn’t hesitate to forgo it.”

“My father-in-law taught me the pride of kosher,” added Hanoka. “Yes, it is possible at times to make things work and fit the kosher certification to the agenda and needs of the client, but one thing was very dear to Rabbi Levy: Kashrut was important, special and very much something to take pride in. As such, it cannot be dealt with flippantly, and only serious and committed clients gain the privilege of bearing certification.”

Not satisfied with hearing matters second-hand and always thirsting to understand the science of everything, Rabbi Levy traversed the globe many times to personally visit hundreds of factories to see operations with his own eyes, “more so than any other kosher personality,” said Hanoka. Rabbi Levy was proficient in the science, technology and the Torah behind the minutest details of everything kosher. The combination of erudition in Torah law and scientific knowhow gained him unparalleled kosher mastery, and he trained a generation of kosher supervisors, even those who could be called his competitors.

Beyond the backend of kosher certification, Rabbi Levy promoted kosher education through publications, classes and personal mentorship. Rabbi Hanoka presently gives dozens of lectures on kosher law and practice, and credits his father-in-law for those activities.

“My father-in-law set up a very well oiled machine, and everything is in place to continue his vision stronger than ever,” said Fogelman.

A Humble Man of Kindness

An outspoken warrior in the kosher world, Rabbi Levy was humble and kind in everyday life, always lending a helping hand to all who turned to him and beyond.

Over the course of his many travels, Rabbi Levy encountered hundreds of shluchim, to whom he lent his love and support. In a public letter, Rabbi Shimon Freundlich, director of Chabad of Beijing, China, writes of his warm relationship with Rabbi Levy, and how throughout the course of the beginning stages of the coronavirus pandemic in China, Rabbi Levy reached out to him almost every day to see how he was doing. Far from a token “how are you?” Rabbi Levy exhibited true care, as Freundlich writes, “His messages and phone calls almost always made me cry, why? Because whenever we spoke on the phone, the first question was always ‘how are your children?’ ”

Active in the Crown Heights neighborhood of Brooklyn, N.Y., Rabbi Levy was the founder and rabbi of the community’s Bais Eliezer Yitzchok Shul. A known philanthropist, he supported many Jewish causes around the world with a focus on education, the global community of shluchim, food distribution for the holidays, and countless discreet and private acts of kindness that will remain anonymous.

He was predeceased by his daughter, Rivka, in December of 2019.