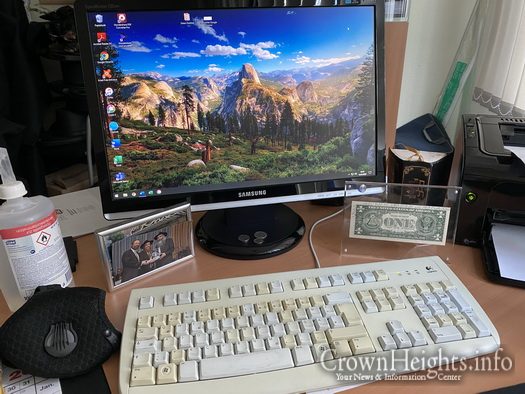 There are the shluchim who had the zchus to see the Rebbe live, to speak with him, to be inspired by him and of course to receive a dollar.

Every dollar the Rebbe distributed with his bracha has its own story and is of course guarded like the apple of the eye.

Now more than 25 years since Gimmel Tammuz, there are already generations of Chabadnikim who are connected to the Rebbe through his Torah and the many videos, but were never at a live ferbrengen, never had a yechidus and never received a dollar.

Those of us who were born after Gimmel Tammus or found our way to Chabad take “comfort” in the story of the “Meraglim.”

As is well known, only two of the 12 spies, Yeshoshuah bin Nun and Calev ben Yefuneh, refused to join the majority and instead gave a positive report about the Holy

Land. What helped them? Moshe Rabbeinu changed Yehoshua’s name from Hosheah to Yehoshua, and Calev prayed at the tomb of the Patriarchs and Matriarchs in Hebron.

We can compare Yehoshua to the generation before Gimmel Tammuz. He got his bracha live with a dollar from Moshe. Calev prayed at the ohel and achieved the same.

In the Tanya (Igeret HaKodesh 27), it is stated clearly that the life of at Tzaddik in this world is bound to his physical body which is limited by space and time. After his physical death, however, he is freed from these boundaries and can thus be found more in our world than during his physical lifetime.

In honor of the 11 of Nissan, the Rebbe’s 118th birthday, I would like to share a story with you that showed me very clearly how much the Rebbe is connected with us today.

Two years ago, we ran into a difficult situation in our lives. We could see the trouble brewing on the horizon and tried everything, b’gashmiyus and b’ruchniyus, to avoid it.

During this time, I wrote to the Ohel very often (I think for a short time most of the letters arriving at the Ohel were mine), and asked the Rebbe for a bracha.

Despite all efforts, the “worst-case scenario” occurred (or so it seemed at the time). I was down in the dumps, not knowing how things would go on from there.

Only a few days after our “worst case” we were supposed to travel to the West Coast of the United States for 10 days. To be honest, I would have loved to have cancelled this trip. But since I had promised several shluchim that I would tell their communities about Jewish life in Germany, my wife and I decided to go on the trip even though we felt broken.

Shortly before departure, I wrote another, two-sentence letter to the Ohel: “The worst-case scenario has occurred. Now more than ever, we need to see that the Rebbe is with us.”

At 7:30pm on 5 Iyar 5778, I had my first lecture at Chabad of Riverside. I had never met Rabbi Shmuel Fuss before. He had absolutely no idea what was going on in our lives. In very un-German-like fashion, we arrived at his Chabad house at the very last second. Five minutes later my lecture began.

90 minutes later, I was already packing up my laptop again. Rabbi Fuss then called me aside and told me something I will never forget for the rest of my life. “Don’t ask me why,” he said, “but during the whole lecture, I had a strong feeling that I should give you a dollar from the Rebbe.”

With these words, he took a dollar out of his desk, shot a photo of it and pressed it into my hand. He received this dollar on the Rebbe’s birthday, the 11th of Nissan.

I was speechless. As we know, most people would rather cut off a finger than give a dollar from the Rebbe to someone else (let alone a dollar from the 11th of Nissan).
We received our sign! From that moment on we knew that there was no “worst-case scenario” because the Rebbe was “traveling with us.”

Two years later, I’m sitting at an online farbrengen in quarantine. I say a l’chaim to the Rebbe, thanking him for being with us in good times and in bad. And I say thank you to a shliach who put us back on our feet with huge “Ahavas Yisrael” at exactly the right moment.