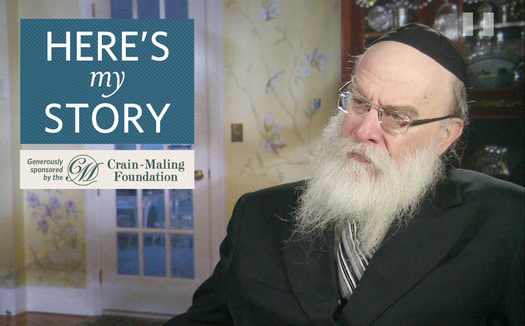 While I was enrolled as a student in Chabad’s Yeshiva in Crown Heights, a remarkable event took place, which involved a no less remarkable object — the Mashiach’s Sefer Torah that the Previous Rebbe had commissioned but that was never finished.

At the height of the Holocaust — on Simchas Torah of 1941 — the Previous Rebbe had announced that he planned to write a Torah scroll with which to greet Moshiach. It was the darkest time for the Jewish people and the Previous Rebbe sought to bring some measure of reassurance to all those deeply troubled by what was happening in the world. These were “the birth pangs of Moshiach” he said, “and we will write a Torah scroll with which to welcome his arrival.”

Although great pains were taken to obtain the highest quality parchment and the best scribe, and although the project was begun with great fanfare, for reasons unknown, the Torah scroll was never completely finished. The project was suspended and the scroll was placed in an old wooden ark — an aron kodesh — where it rested for many years. The Torah stood there ninety-nine percent complete.

Sometime in 1968, the Previous Rebbe’s secretary, Rabbi Eliyahu Simpson, noticed that the old wooden ark — which stood in the office of Rabbi Shmuel Levitin in 770 — had deteriorated over time, and he ordered a new one. And then he requested that the Rebbe move the Sefer Torah to the new ark. The Rebbe responded that he would do so that afternoon before the onset of Shabbos.

Now it was my custom to pray Mincha, the afternoon prayers, in the Rebbe’s synagogue before Shabbos. I was always there when the Rebbe prayed together with a small group, and it was always very beautiful prayer service — a quiet intimate Mincha, very extraordinary.

That day, the word got around that the Rebbe was going to move the Torah scroll from the old aron kodesh to the new one, and people were standing around to see if they could catch a glimpse of this event. One could go around the building and see into the room through a window but, out of respect for the Rebbe, I would not even contemplate such a thing. Instead, I waited, along with some others, all of us hoping to catch a glimpse through the doorway.

As we stood there, we heard a clack and we saw the Rebbe coming. As he came down the hallway, he passed a small closet and noticed that some coats had fallen on the floor, so he bent down to pick them up. When the Rebbe started rehanging the coats, everybody rushed over to help. Then he went into the room, leaving the door open, and we saw him move the Torah scroll.

After that, the whole subject was forgotten until two years later, when the Rebbe decided to finish the writing of this Torah scroll.

The decision came about as plans were being laid to commemorate the 20th anniversary of the Previous Rebbe’s passing and to mark 20 years of the Rebbe’s leadership of Chabad-Lubavitch. Ideas for how to do this came from all over the world, but it was a woman in Kfar Chabad, Israel, who suggested that the Moshiach’s Sefer Torah be finally finished.

Once the Rebbe launched this project, a worthy scribe had to be hired. One of the original scribes — Rabbi Shmaryahu Faktor —was again selected. Only a few lines remained to be finished and the Rebbe invited anyone who wanted the merit of participating in this sacred project to take part by donating one dollar toward the completion. Although the early participants in the project, in the days of the Previous Rebbe, were able to subsidize the writing of specific letters, now there were too many donors and too few letters, so this was not possible but, the Rebbe said, “the angels would divide the letters among all [the contributors].”

The day finally came for the Torah scroll to be finished. It happened on the afternoon of Friday, the 9th of Shevat, 5730 (January, 1970) — and I was there. The rabbis sat on the first set of benches behind the Rebbe and I was right behind them. It was a solemn an event as 770 had every seen. You could cut the seriousness and anticipation with a knife.

I vividly recall Rabbi Simpson coming down the stairs with the Torah scroll in his arms, and the Rebbe coming down behind him carrying a big box. Nobody had any idea what was in that box and, of course, we couldn’t help but wonder.

The Rebbe put the box down on the table, and then the completion of the last few letters began. Finally, the quill was passed to the Rebbe for the final stroke, but he made the scribe his agent, so to speak, and Rabbi Faktor finished the writing of the scroll.

Then the ceremony began with the recitation of psalms and the singing of several songs selected by the Rebbe. And that is when, to the astonishment of the crowd, the Rebbe opened the box he had brought to reveal a magnificent silver and gold crown which he placed atop the scroll.

Later, I learned that the week before the event, the Rebbe called in the silversmith who was supposed to make this crown. The man had a half-a-dozen samples to show the Rebbe who looked them over and said, “I want the bottom like this one, the middle like this one, and the top of that one.”

The man asked, “How fast does the Rebbe need it?”

The guy looked at the Rebbe and said, “But it takes three or four weeks to do.”

“But I need it next week,” the Rebbe said.

The man met the deadline and produced a beautiful crown.

Walking under a canopy amid burning candles, the Rebbe carried the Torah scroll to the front of the synagogue and placed it in the aron kodesh. After that, he came back to his place and began a Chassidic discourse on the subject of writing a Torah scroll.

When he was done, he concluded: “We have just completed something that had been lacking. Now it is only up to each of us to finish the last few things that need to be done in order to break through the exile and bring Moshiach.”

May this happen quickly, in our days.

For 33 years, Rabbi Zvi Hirsch Telsner has served as a Chabad Shliach in London, England, including 23 years as the rabbi of the Finchely Central Synagogue (from 1983 until 2006). More recently, he has taught at the Yeshivah Centre in Melbourne, Australia. He was interviewed by JEM’s My Encounter Project three times in June of 2014.