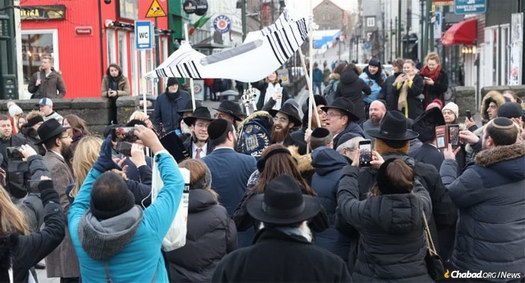 Celebrants danced down the streets of Reykjavik, Iceland, to mark the first-ever completion and inauguration of a Torah scroll on the European island.

History was made in Iceland as celebrants danced down the streets of Reykjavik Feb. 16, to mark the first-ever completion and inauguration of a Torah scroll on the European island, following a reception last Thursday at the home of the U.S. Ambassador to Iceland.

For more than 1,000 years of its recorded history up to just about two years ago, Iceland never hosted a full-time Jewish institutional presence. Aside from ad hoc synagogues that existed during World War II set up by Jews who were fleeing the Nazis, communal observances of Jewish life in this remote country have always been few and far between.

That all changed with the May 2018 arrival of Rabbi Avi and Mushky Feldman as emissaries of the global Chabad-Lubavitch movement. The couple established the island nation’s first permanent Jewish presence, and in just two short years have succeeded in anchoring a vibrant Jewish center in Reykjavik, the nation’s capital, providing for both the growing local Jewish community, as well as the many tourists who pass through the popular destination.

And now, they’re welcoming a new Torah scroll that will call Reykjavik home.

“Until now we’ve been borrowing the Torah scroll we read every Shabbat morning,” Feldman told Chabad.org. “We’re very excited to finally have our own.”

The Jewish community of Reykjavik can thank Uri Krauss of Zurich, Switzerland, for their new treasure. Grateful for reaching the milestone of his 50th birthday, Krauss felt that donating a Torah scroll would be an appropriate undertaking for his new chapter in life. While a new Torah scroll would be appreciated in any Jewish community, he wanted this one to have added impact.

After consulting with his local Chabad rabbi and conducting some personal research, Krauss felt that Iceland would be the perfect place for a new scroll. It’s not too far from his native Switzerland, yet definitely off the beaten path, its Jewish infrastructure still in its infant stage.

The connection with Rabbi Feldman was made, quill was applied to scroll, and just under a year later, the project has reached its climax: A new Torah Scroll in Iceland is born.

Dancing on the Streets of Reykjavik

Welcoming a new Torah scroll is always a joyous affair in the life of a Jewish community, and it was just that on the streets of Reykjavik. The scribe’s year-long effort coupled with the joy of the completion of yet another scroll with the word of G‑d is a cause for celebration, and hundreds gathered to watch the Torah’s last few letters filled in by members of the community.

Once finished, the scroll was wrapped in its traditional mantle and lovingly paraded down the streets under a chuppah, a canopy, like the one spread over a bride and groom on their wedding day. The Torah is the bride, and the jubilant celebrants are her groom.

“How moving to see the scroll being paraded down Laugavegur, Reykjavik’s main street,” Feldman expressed. “And how beautiful to watch as the community gathered at the gala reception, with dignitaries and guests, along with the Krauss family and their friends, and celebrated this momentous occasion in Icelandic—and indeed, Jewish—history.”

Reykjavik natives had a hard time believing that such a scene was really happening. To see a Torah scroll paraded down the main street in such an open display of Judaism was like something out of a dream. “One particular participant told me that at first, she was embarrassed at the prospect of Jewish people parading down the street with a Torah. But after taking part, she was so proud and happy that she accompanied us.”

“I really can’t find the right words to describe what happened in Reykjavik today. One thing is for sure: The Jewish community here will remember this day forever,” Feldman exclaimed.

Reception at the Home of the U.S. Ambassador

U.S. Ambassador Jeffrey Ross Gunter is not only a diplomat, but a proud Jew. A personal friend of the rabbi, he was excited about the prospect of this Torah scroll and all that it means both for Iceland and the American spirit.

Wishing to show his support and pride in the event, Ambassador Gunter went the extra mile: Thursday prior to the completion ceremony, he hosted a reception in the embassy to celebrate and honor the occasion.

“The atmosphere was truly one-of-a-kind, and we witnessed history in the making,” said Feldman. “The staff at the embassy were ever gracious, allowing us to kosher the kitchen, and the chef really put out a beautiful kosher spread.”

In his remarks, Gunter conveyed America’s unwavering commitment to religious freedom around the world. This means defending the right of all people to live their lives according to their conscience and to worship freely.

“I am honored to have Rabbi Feldman and leaders of Jewish communities around the world here tonight as we celebrate the first sefer Torah permanently placed in Iceland,” said Gunter at the event. “This is historic and congratulations to Rabbi Feldman as he grows the Jewish community of Iceland, contributing to the values that we as Americans all cherish.” 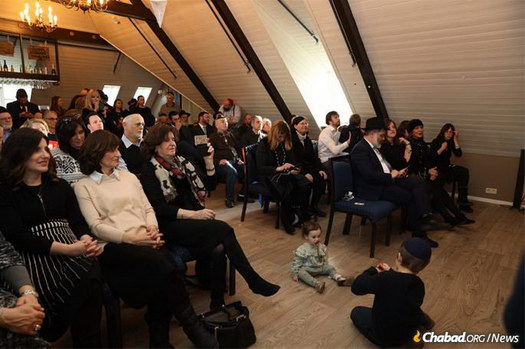