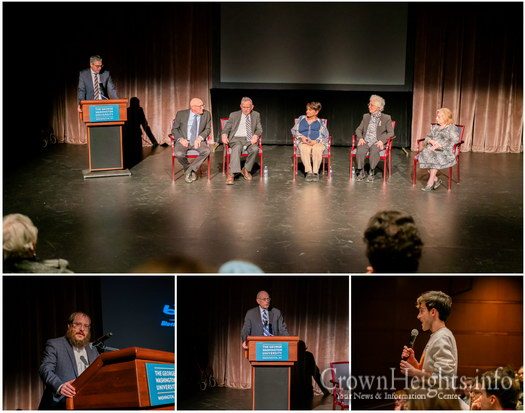 GWU Hosts Event to Commemorate 75 Years Since Liberation of Auschwitz

On Sunday January 26th, the Rohr Chabad Center for Jewish Life at GW held a screening of a Holocaust documentary followed by a Question & Answer session with survivors to commemorate 75th anniversary of the liberation of Aushwitz-Birkenau by the Russian army on January 27th, 1945.

Held in a packed auditorium, the event opened with a screening of “Complicit,” a film produced by Robert Krakow, about the infamous story of the St. Louis, a German ship carrying 937 Jews attempting to escape Nazi atrocities which was refused entry by several countries, including the United States. While 27 of those passengers were permitted entry into Cuba, the ship was tragically sent back to Germany where most of the remaining passengers ultimately perished in the Holocaust.

Attended by students as well as several dignitaries, the film screening was followed by a Q&A in which four survivors of the St Louis answered questions from the audience. The survivors also announced a proclamation they had written demanding that the U.S. and all countries involved in the incident publicly take responsibility, and issue a formal apology.

Rabbi Steiner of the Rohr Chabad Center explained that his intention behind organizing this event was to get GW students as close as possible to the Holocaust on the 75th anniversary of the liberation. “The best way to do that was to have [the students] hear directly from the survivors themselves. I wanted to give the students an opportunity to touch history and come face-to-face with the tragedy of the Holocaust. As the number of survivors continues to dwindle, this opportunity becomes more and more scarce, so it is imperative that we do this now.”

“We’re also here to deal with questions about how you and I must be vigilant to never be complicit again,” he added.

Present at the event was Ambassador Stuart Eizenstat, former Ambassador to the EU as well as a former member of the Clinton administration and Special Representative of the President on Holocaust-Era Issues. Eizenstat spoke about the need for a legislative push to require states mandate Holocaust education be implemented into their school curricula. Although there have been expressions of support for an increase in Holocaust education at the federal level, what schools are required to teach is maintained by the states. So far, only 11 states have legislated mandates that their schools teach about the Holocaust.

“I hope the students will absorb in their own lives the need to directly and forcefully combat anti-Semitism and any forms of religious, racial, ethnic, or gender hatred,” Mr. Eizenstat said. “I also hope they will pass along to their children the powerful message of the survivors that the United States must always live up to its moral responsibility as a country willing to accept genuine refugees who have a “well-founded fear of persecution”.

The survivors were adamant that this event wasn’t solely about remembering the past, but also about what lessons should be learned in order to create a brighter future.

Also, present at the event were Acting Deputy Ambassador of Canada, Marvin Hildebrand whose Prime Minister, Justin Trudeau, issued a formal apology for Canada’s complicitness during the Holocaust. Deputy Chief of Mission for the German Embassy, Ricklef Beutin spoke emphatically about his country’s need to forever take responsibility for the Holocaust. “Germany’s responsibility [for the Holocaust] does not expire,” he said.

“Where do we go from here?” Rabbi Steiner asked the room. “I believe it’s important to remain true to one’s own identity and faith while simultaneously being tolerant of the identities of others. In earlier generations, America prided itself on being a “melting pot” where people of various cultures, faiths, and persuasions melded together into one single identity. Since then, we have progressed to recognizing that the whole is further enriched when each of us is able to come together while still retaining our own unique identities and cultural traditions.

The students seemed to take away the lessons imparted by the film and the speakers. Speaking of what she took away from the event, GWU sophmore, Maggie Sexton said: “One lesson I learned is how important it is for our generation to ensure that the horrors of the Holocaust are taught to future generations. If we don’t make sure to fight for the awareness of the Holocaust, history could repeat itself.”

“I felt it was important for GW students to be at this event, because like many of the passengers said, it is our job to educate the next generation in order to prevent denial and keep the stories alive,” said Samson Kampler, a freshman. “As a grandchild of two Holocaust survivors, I have been fortunate to hear the stories of such a dark part of history directly from my grandparents. [But] for many students, [hearing from a survivor] was a once in a lifetime experience. As the number of Holocaust survivors declines every year, it is ever more important to educate the next generation and hear stories directly from these survivors.”