« Firefighters Respond to 2-Alarm Fire on Nostrand Ave
Project Likkutei Sichos: Finishing All of the Sichos Over the Course of 8 Years » 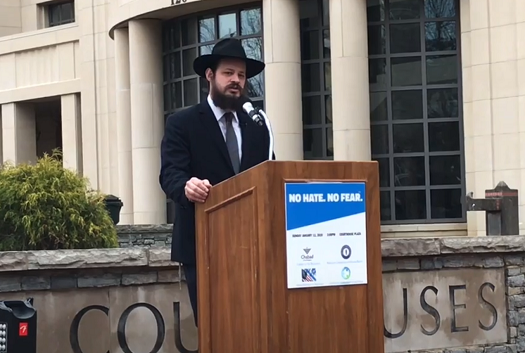 In the wake of the horrific stabbing attack in Monsey New York, and the string of violent hate crimes against the Jewish community in Brooklyn and Boro Park, Chabad of the Bluegrass, in partnership with the Lexington Leadership Foundation, Jewish Advocacy of Kentucky, and The Kentucky Commission on Human Rights, hosted a day of Unity, Solidarity and Prayer at the Stephens Courthouse Plaza on Sunday the 12th at 3:00 p.m. The event came a month after the shooting attack on a kosher grocery in Jersey City NJ, which left four dead.

He also spoke of the inspiring words of the Lubavitcher Rebbe to Mayor Dinkins, following the Sharpton-led riots in Crown Heights. The Rebbe said that we should not identify a Black community and a Jewish community, but one single community.

Congressman Andy Barr (R) spoke of several initiatives he is leading in Congress, including the struggle against BDS and the Antisemitism Awareness Act, which seeks to codify President Donald Trumps executive order protecting Jewish college students. “We will stand against Antisemitism wherever it appears” Congressman Barr pledged. “Especially in the halls of Congress”.

“The Lubavitcher Rebbe teaches that such darkness can only be combated by increasing light in our personal lives” said Shoshi Litvin, Director of the Chabad at UK Jewish Student Center. “so we are asking everyone to stand up, take one positive action, and to ask a friend to do the same.”

« Firefighters Respond to 2-Alarm Fire on Nostrand Ave
Project Likkutei Sichos: Finishing All of the Sichos Over the Course of 8 Years »