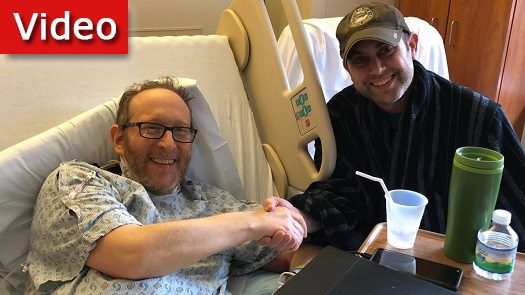 Eric Steger has given the gift life many times before: In 2007, he donated bone marrow to a woman in Maryland, and he has donated platelets around 140 times over the years.

But last week, Steger, a 50-year old man from Sunnyvale, California, outdid himself by donating an entire liver lobe, or 60% of his liver, in a 6-hour surgery conducted at the University of Pittsburgh Medical Center in order to save the life of a stranger from Iowa.

“Eric is always looking to help people in a quiet way,” Rabbi Yisroel Hecht of Chabad of Sunnyvale told Sue Fishkoff of the Northern California Jewish news outlet J. “He was really focused on the opportunity to do this, to save someone’s life. That’s the kind of guy he is — a real mensch.”

Steger was introduced to Chabad around 12-13 years ago. Over the years, he has become increasingly observant, keeping Shabbos and davening daily.

After the bone marrow donation, Steger got in touch with Chaya Lipschutz of Brooklyn, who runs KidneyMitzvah.org, an organ-matching organization. Although his original desire to donate a kidney did not work out for medical reasons, Steger contacted Lipschutz last year again with a new idea: He wanted to donate part of his liver.

Liver donations from living donors are very rare, and the risks are high, but Steger was determined and Lipschutz began looking for a patient in need. After three potential matches fell through when other donation sources became available, Lipschutz finally found Jeffrey Kurtz-Lendner, who had served as a rabbi in Florida and was suffering from NASH, a severe form of nonalcoholic fatty liver disease. Steger had found the opportunity he was looking for.

After the surgery and liver donation were successfully completed, Robin Kurtz-Lendner, Jeffrey’s wife, told Fishkoff: “Thank G-d for Eric. It’s the most incredible gift he’s given. This angel came out of nowhere. Who does something like this for a stranger? Eric is an amazing human being, he saved my husband’s life.”

Steger says he always keeps a card in his wallet with a card with a photo of the Rebbe and a message to prepare for Moshiach with acts of goodness and kindness. “We need to do what we can to spread positivity in the world,” he told J. “With all the negative things going on, we have to do the opposite to counter it. We have to spread life, and spread hope.”