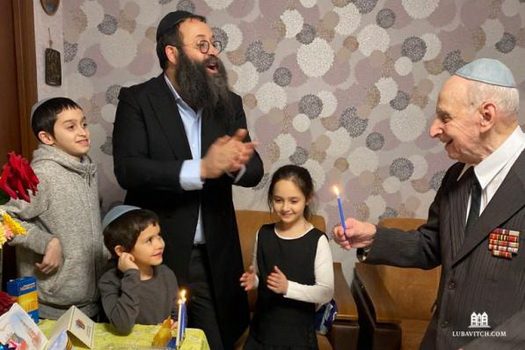 The Rostov Jewish community has a long list of the elderly and homebound. Rabbi Chaim Danzinger and a team of volunteers visit those on the list, bringing food, medicine, seasonal and holiday supplies, and much appreciated social interaction.

When the rabbi visited Yeffim Isakovich at his home on Thursday, the fifth night of Chanukah, to celebrate the Red Army Veteran’s 100th birthday, Yeffim marked another milestone as he lit the menorah for the first time in his life.

At just two-years-old, Yeffim was orphaned of his father who was killed in an anti-semitic attack, while he was on the way to Belarus for work. His body was never found. His mother who had very limited knowledge of Judaism and its practice brought up the boy.

During his university years, World War II broke out and Yeffim was drafted to the Red Army. Stationed in Czechoslovakia he fought the Germans.

Under the authoritarian rule of Communism, Yeffim–whose given name is Chaim according to a recently discovered birth certificate–had no readily available means of accessing a Jewish community. Until Communism fell and the Jewish community, under the leadership of Rabbi Danzinger began to re-establish itself, volunteers would visit Yeffim and he would consistently attend an annual celebration at the Synagogue to mark Victory Day that honors war veterans.

When the rabbi arrived at Yeffim’s home on Thursday, the centenarian was dressed in his best suit in honor of his special day. He had hung postcards and official notices congratulating him on this milestone on the walls.

After exchanging birthday greetings, Rabbi Danzinger asked Yeffim if he would like to light the menorah. “It would be my honor,” the older man said. “I’ve never done it before because I didn’t know how.”

Together the rabbi and the vet who fought the Nazis and lived through Communist rule, set up the menorah, recited the blessings and carefully kindled its flames.

“This is a story of Jewish perseverance,” Rabbi Danzinger shared with Lubavitch.com. “If we ever think it’s too late for us to take on a new mitzvah, or make a change in our life, think of this man. Yeffim lived through adversity from his earliest years and he’s still embracing and returning to his roots at age 100.”