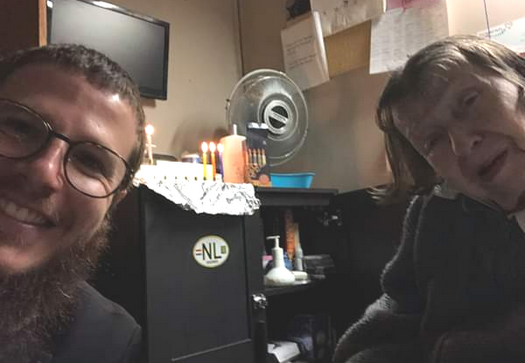 It was the third night of Chanukah, 2019, in Guelph, Ontario, and Hella Bergeron, a 96-year-old Holocaust survivor at a local nursing home, was alone. Then Rabbi Raphi Steiner walked into her room.

“I said, ‘I’m a rabbi and I came to celebrate Chanukah with you,’” says Steiner, who co-directs, together with his wife, Mussie, Chabad-Lubavitch of Guelph, a city an hour west of Toronto. “And I told her I have a menorah and latkes.”

Bergeron burst out crying. Steiner asked her when the last time was that she had seen a rabbi.

A day earlier, on Monday, Dec. 23, Chabad.org had received an email from a man named David. He explained that his mother was a Holocaust survivor and living isolated in a nursing home in Guelph, Ontario. She really needed to connect to the local Jewish community, he wrote, and had searched all over the internet to assist her with that. “Please help.”

Chana Benjaminson, a member of Chabad.org’s editorial team, forwarded the email on to Steiner, who reached out to David.

“Hi David,” he wrote. “Your email to Chabad.org was forwarded to me. I’m the Chabad rabbi here in Guelph. I understand that your mother is here in Guelph … It would be my pleasure to go over there for a Chanukah visit.”

That evening, when Steiner walked into Hella’s room and introduced himself, she burst into tears. Then the rabbi set up the menorah and lit a candle that they held together. Unable to recite the blessings herself, Steiner helped her along with the words and then kindled the colorful candles on the small tin menorah on her behalf.

“Oh G‑d, I don’t remember so many words anymore,” she says in a moving moment captured on video. “But I try.”

Hella, whose maiden name is Cohen, was born in 1924 in Rotterdam, Holland. That’s where she spent the war years, hiding family members, her son among them, in a deep pit dug behind the house covered with wood and carpet.

Hella later told Steiner that she had survived the Nazi’s Vught concentration camp as well, the only SS camp in the Netherlands. She moved to Guelph a few years ago and was isolated from the Jewish community. Now she asked the rabbi if there were Jews in Guelph.

“How do they do on the outside world?” she asked Steiner. “Do they leave us alone now? Or not yet?”

“First, let’s talk about the light that we just brought into the world,” the rabbi answered gently. “Happy Chanukah!”

Did Hella have a message for the world, he asked her?

“Happy Chanukah to the whole world!” Hella responded. “We are back! … and we will not go away again!”

The next day Steiner, who serves the city’s Jewish community, including the students at University of Guelph, wrote about his encounter on Facebook, a post that is quickly going viral”

“We lit the menorah together and I promised I’ll be back!,” Steiner wrote.

“Folks, let’s not let this woman be isolated anymore! I would really love to setup Guelphites and Gryphons to visit her every so often. If you’d be willing to visit her on a Friday afternoon (or another day), bring her a Challah (I’ll provide), and possibly light Shabbat candles with her, comment below!”

And the comments, Jewish boys and girls studying at Guelph volunteering to visit Hella, are rolling in.

Hella Bergeron, a Holocaust-survivor born in Holland, has found a home with a Jewish community in Guelph that she didn’t know existed. It took an email, a car and a menorah to make it happen—a 2019 Chanukah miracle.