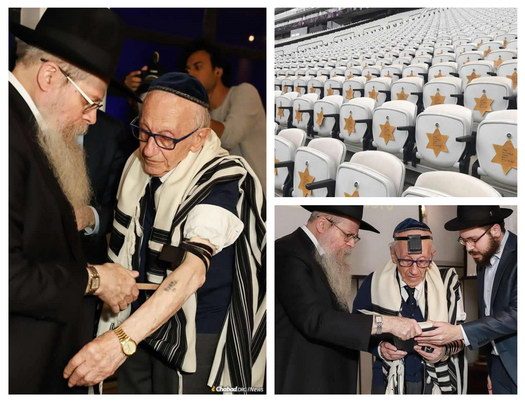 Andor Stern, the only known Holocaust survivor to have born in Brazil, celebrated his bar mitzvah at the age of 91 in a moving ceremony at Kehilat Israel, São Paulo’s oldest Jewish synagogue. The celebration took place exactly 81 years after Kristallnacht (“Night of Broken Glass”), the infamous pogrom of 1938, when Germans and Austrians rampaged through Jewish neighborhoods, instilling fear and horror as they violently destroyed 267 synagogues, 7,000 Jewish-owned businesses and incarcerated 30,000 Jewish men in concentration camps—a striking contrast to the joy and Jewish pride that could be tangibly felt as Stern put on tefillin for the first time, surrounded by loved ones, friends and community members.

The bar mitzvah had its roots a few months earlier when the São Paulo Holocaust Memorial committee reached out to Stern, asking him to participate in a video featuring interviews with Holocuast survivors. In the course of the interview, it was discovered that Andor was the only known Brazillian-born survivor of the Nazi death camps.

“How did a Brazillian young man find himself in a death camp in Poland?” wondered Chabad-Lubavitch Rabbi Toive Weitman, head of the São Paolo Holocaust Memorial. “Stern’s fascinating story, which he related over the course of the time we spent with him, was quite poignant,” he told Chabad.org.

In 1930 at the age of 3, Stern’s family moved from Brazil to India, where Stern’s father worked for a mining company. Six years later, they moved to Hungary, where his grandparents lived. When Brazil entered World War II in 1942 and sent soldiers to fight for the Allies in Italy, the 15-year-old was considered an enemy of the state and sent to work in a labor camp in the Lower Carpathian region. Seeing a chance to escape, Stern fled the camp. In April 1944, he was arrested and placed on a freight train to Auschwitz, where a few months later his mother and grandparents were killed in the gas chambers of the death camp.

“I saw my mother coming out of the chimney on Oct. 6, 1944. It’s a drag having to remember that, but I remember everything,” he said in a recent interview with Folha de S. Paulo newspaper. “I was out of the world until May 1, 1945, when we were released by the American soldiers. I was 17 and weighed 60 pounds.”

“After hearing such a heart-rending story, we were genuinely moved,” said Weitman. During the interview, Stern said that he had only recently made the decision to reconnect to his Jewish roots, and noted that with his family hiding in Hungary during the war and then being interned in the camps, he had never laid tefillin and so had never officially celebrated his bar mitzvah.

“We had been planning a large event event for the Brazillian community marking 60 years since Krstallnacht, and we thought, ‘What a beautiful idea it would be for Mr. Stern to lay tefillin for the first time in his life at the event,’ ” said Weitman.

Indeed, some 60 years after Auschwitz was liberated, Stern stood proudly donning tefillin, a symbol of Jewish pride and strength. A father of five daughters, nine grandchildren and “too many great-grandchildren to count,” Stern says he was finally able to perform this special mitzvah, binding himself and all of his ancestors and descendants in an eternal bond with G‑d.

The event was indeed beautiful, says Weitman, and epitomized the resilience of the Jewish people. “This is our answer to Hitler and Nazism,” said the rabbi. “Hitler’s goal was not only a physical slaughter of the Jewish people, but also a spiritual extermination. He failed. Mr. Stern continues on, connected to his essence, celebrating life with his family.”

The President of the Museum Board, Breno Krasilchik, spoke at the event and shared some of his sentiments about the celebration: “Happiness does not have an age and does not get old, it always appears in the best moments of life. We are honored to celebrate the life of Mr. Andor Stern today at this momentous Bar Mitzvah celebration. I wish him Mazal Tov.”

Stern, on the other hand, sees himself as a simple man, grateful for life.

“A psychiatrist once told me that everyone who goes through what I did in the war will never be whole again, will never leave the concentration camp. I left it behind,” Stern said during the ceremony. “I’m lucky. I’m not a hero. Despite everything, I am very grateful for everything.”