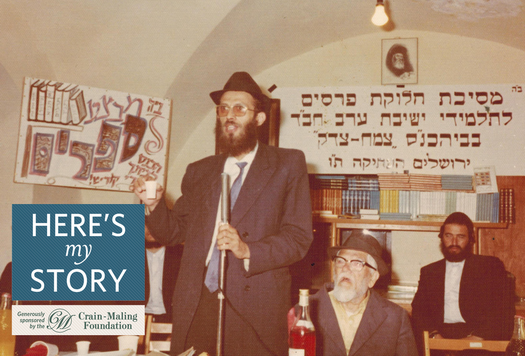 I come from a respected Lithuanian family that had no connection to Chabad or chasidic ways. In fact, just the opposite. My great-grandfather, Rabbi Boruch Ber Leibowitz, was one of the senior disciples of Rabbi Chaim Soloveitchik of Brisk, and I was sent to study at Yeshivat Kamenitz in Jerusalem.

But in 1969, I was privileged to be introduced to the Tanya, the seminal work of the Alter Rebbe, the 19th century founder of the Chabad Movement. And from that point on, my connection to Chabad only grew stronger. I participated in the studies of chasidic teachings at the Chabad yeshivah, although a directive came from the Rebbe that this had to be with my parents’ knowledge and consent.

When I got engaged in 1975, I managed, despite my parents’ opposition, to travel to New York to seek the Rebbe’s blessing for my upcoming marriage. In a private audience, the Rebbe showered me with blessings and encouraged me to stay in New York until the wedding, since it would be better for me to be separate from my future bride until then. “You will be able to learn the topics of Jewish law that you need to know before your wedding here as well,” the Rebbe said, “but you should write to your parents and future parents-in-law to find out whether they need you for the preparations for the wedding.”

But when I told the Rebbe that my parents hadn’t wanted me to come to New York at all and were pushing me to return, he instructed me to go back after Purim which was two weeks later. The Rebbe explained his instruction, “It is not clear whether being near the bride puts you at risk of violating a Torah prohibition or a rabbinic decree, but creating discord is certainly prohibited by Torah law…”

After I was married for some time and my wife was still not pregnant, we visited a renowned expert, Professor Berkowitz, who declared that my wife will never be able to have children. Unwilling to accept his verdict, we decided to travel to New York for the High Holidays and ask for the Rebbe’s blessing. This was in 1976.

We were granted an audience, which lasted about ten minutes, at 4 o’clock in the morning. When we told the Rebbe what Professor Berkowitz had said and requested his blessing, the Rebbe quoted a verse from the Book of Deuteronomy, “Vishinantam livanecha – And you will teach Torah to your children.” He said that, although the Talmud states that “your children” can refer to one’s students, he did not mean it like that in our case: “I mean literal children!” he stressed.

The Rebbe repeated these words three times throughout the audience, and we left with great joy.

When we returned home, we sought out a different doctor and, as a result of his treatment, my wife indeed became pregnant. Close to the birth, my father-in-law wanted us to see another doctor, and whom did he choose? Professor Berkowitz. When we came to him, he couldn’t believe his eyes!

Two years later, our second son was born after my wife underwent the same treatment again, and afterwards she gave birth seven more times, all without any treatments!

During the audience with the Rebbe, we also spoke about the work that we were both doing in the field of education. Even before I was married, I had been conducting evening classes and Shabbat parties for boys at the Tzemach Tzedek synagogue in the Old City of Jerusalem. I had great success there, and when I reported this to the Rebbe, he sent me five hundred dollars to also hold Shabbat parties for girls, which I did.

I had mentioned to the Rebbe that sometimes I had “stage fright” when having to stand up and speak before the children. Hearing me say that, the Rebbe turned to my wife and with a smile on his face said, “Before G‑d, he doesn’t have such a great fear…” meaning that if one is not so afraid of G‑d, why should one be afraid of children. He then advised that I learn by heart Chapter 41 of the Tanya, which speaks about fear of G‑d.

Some years later, in the mid-1980s, I was helping the Kollel Chabad organization and, as a result of this work, I was given a fax machine. Such a machine was a rare commodity at the time, and it was one of the very few in all of Jerusalem. As a result, people would come to my house when they needed to send letters to the Rebbe. At first ten or twenty people came per day, but later the stream of people intensified, and the Rebbe’s secretary, Rabbi Leibel Groner, received permission from the Rebbe to send his answers directly to me. I didn’t see the letters that people wrote – I would fax them and return them right away – but the answers I did read, as I was directed to call the people and pass on the Rebbe’s responses.

Chabad chasidim weren’t the only ones who turned to the Rebbe; indeed, Jews from all different backgrounds sought his advice. For example, the renowned cognitive psychologist, Professor Reuven Feuerstein, would receive answers from the Rebbe every few days.

Another example was an important researcher from Hebrew University, a non-religious person, who frequently consulted the Rebbe. Once he asked for a picture of the prayer book of the Baal Shem Tov, the founder of the chasidic Movement, which is in the Chabad Library. In that prayer book, in the Birchat Hamazon section, in the blessing after a meal which speaks of G‑d’s open hand, the word ha’kedoshah (meaning “holy”) is uniquely spelled ha’gedushah (meaning “overflowing”). And the Rebbe sent his secretary to have the precious book retrieved from his library so a copy could be taken of that page, which I passed on to the researcher.

It got to the point that every morning I would receive about two hundred answers for people all over Israel! I would begin making phone calls early in the morning and keep calling until two in the afternoon, when I would go to teach at the Toras Emes yeshivah. I devoted many hours to this work, because the joy that people expressed when they received an answer or blessing from the Rebbe was indescribable.

In 1987, the Rebbe asked his chasidim to increase in their Torah study and to report back to him. Many hundreds of chasidim came to my house to send the Rebbe a fax with their reports, and I also sent one of my own. In it, I told the Rebbe that I was resolving to add to the time that I was devoting to convey the Rebbe’s answers to the people who sought his advice. I was the only one who received a response, stating that the Rebbe would pray for me at the gravesite of the Previous Rebbe, and this indicated to me how important it was to him that his advice and blessings were communicated back to those who were reaching out to him.