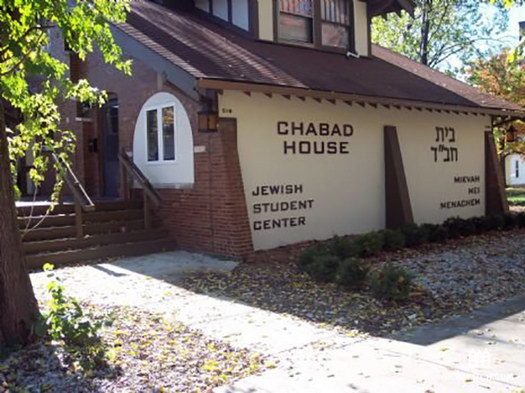 Chabad of Indiana University’s new home is only a short block away from its predecessor, but its central location acts as a magnet to the school’s 3,000 Jewish students. The new building boasts 7,000 square feet, almost double the space of its previous quarters, across tall-ceilinged, light-filled rooms. In most ways, it far surpasses Chabad’s home of 30 years.

The move, though advantageous, wasn’t sought after by Rabbi Yehoshua and Zlata Chincholker, Chabad’s representatives here for 29 years. As far as they were concerned, they would have been happy to remain in the original Chabad student center.

More than three decades ago, Rabbi Avrohom Grossbaum, Chabad’s head representative to Indiana, was searching for an ideal location to set up shop near the Bloomington campus of IU. Well before Google or Iphones, the intrepid rabbi headed to the local courthouse where he thumbed through homeowner’s tax records to locate a site within a small radius around the university. He found a potential property and called the owner who offered an investment property a block away from the school. The deal was made and in those early years, Grossbaum, and his wife Nini, and their children, visited IU each Shabbat from their home in Indianapolis.

In the early 1990s, the Grossbaums invited the Chincholkers to join their team, and they have been there since, running programming and classes for a generation of Hoosiers.

All would have stayed as status quo, if Grossbaum hadn’t received a call from University administrators one day last semester.

“They told me that they wanted our lot to build a new building: it was the only home on the block not already owned by the University,” explains Grossbaum. “I told them it was not for sale. To their credit, they made it clear that they would not invoke eminent domain, but that they would help us find another spot to exchange.” The school showed Chabad representatives several potential sites, but each was nixed for various reasons. Until they came to 703 East Seventh Street.

Sitting directly across from the Student Union, the stately home is in a perfect location for high traffic visibility and visitation. Zlata Chincholker, whose degree is in art education but whose passion is her IU students, has already erected several installations for the as-yet unfinished building. “The students have stopped asking when we will renovate,” she laughs about the raw space, “they love it here. The vibe is great.” Chincholker dreams of a Starbucks-like cafe on the center’s wide screened-in porch where they “can stop by anytime for coffee, cookies, homework and relaxation in a warm, safe, and welcoming place.”

The Chincholkers, who host between 40 and 80 students each Shabbat, as well as regular classes and events, are, after decades here, the age of the students’ parents.

“We put great effort to be in tune with each precious soul that we encounter and as time goes on, we recognize each individual’s likes, challenges, needs, and strengths so that we can better accommodate them according to where they come from and where they are at the moment,” says Chincholker. “If someone doesn’t come one week, I ask where they are and check on them, like my own kids. We really enjoy the students here. We feel so young with them.”

Indiana University not only helped Chabad move house, they also wrote a check to be directed towards a new mikvah and general renovations. A larger general room, a guest suite, and living room are all in the works. But for now, the Chincholkers and their many students are simply enjoying the airy space and the endless possibilities.