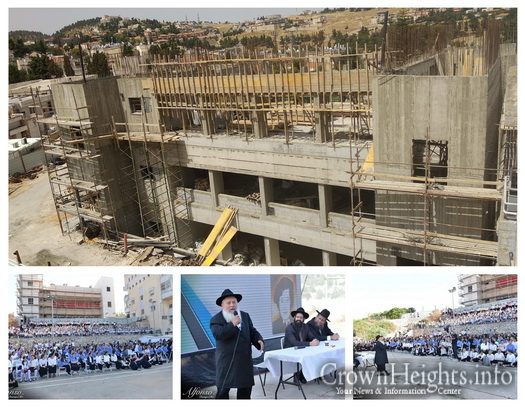 B”H, since its founding in 5735, Beis Chana has been reaping the benefits of the Rebbe’s brachos. This year, Beis Chana celebrates its 40th graduating class. The kick-off of this anniversary year began with the annual Vav Tishrei Kinus Achdus in honor of the Rebbetzin Chana’s yahrtzeit – Beis Chana’s namesake.

The sheer number of students at this event was striking – in the past five years, Beis Chana merited 40% student growth.

Beis Chana Seminary (Israelis and Chutz L’Aretz) now numbers 350. The Bnos HaShluchim–Naale High School program began with ten students and has expanded to 80 this year with students arriving from the USA, UK, Canada, Sweden, Japan, Ukraine, Russia, France, Venezuela, and other countries. The Israeli High School for local students and those from across Israel has grown to 540. Beis Chana earned the title – largest Chabad mosad in Tzfas! Kein Yirbu!

With all this remarkable student expansion, the campus was bursting at the seams – not enough beds, not enough classrooms, no auditorium (which had to be converted into classrooms), not enough seats in the lunchroom… no more room for anything or anyone.

Beis Chana prioritizes accepting as many students as physically possible – and then some – so the summer was spent rapidly building a lunch room expansion, new classrooms, new dorm rooms, new offices, and entire new three floor wing that will include a Shul, auditorium and classrooms. A total of 1800 square meters (5900 ft) was added or renovated over the summer – and this is but the beginning of the expansion with many more meters in blueprint….

The space is beautiful with a Jerusalem stone exterior and a sleek, modern interior design, that includes state-of-the-art sound and acoustics, and overlooks a breathtaking view of the Kinneret.

With ‘Lchatchila Ariber’ as the motto, this expensive project is being pushed ahead despite the lack of any current or projected government or municipal funds. May Hashem grant Beis Chana continued physical and spiritual growth, Chassidishe nachas from its 900 students, the necessary funds to re-pay its building loans in the coming year, and to greet Moshiach with its thousands of graduates.