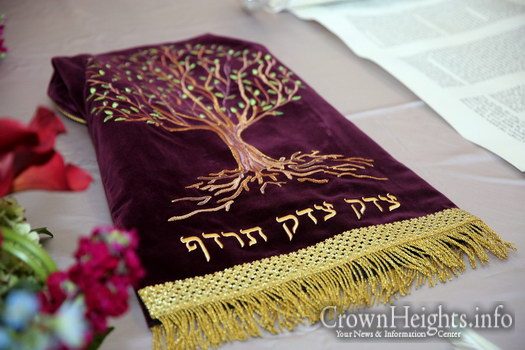 I was recently honored for my pro bono work in the criminal justice arena, including my work on several successful clemency efforts, by having a Torah dedicated to me. It was a deeply spiritual moment when I wrote the last letters a few months ago (with the help of a professional scribe) of the Torah that was started just days after my efforts helped secure the release of Sholom Mordechai Rubashkin, bringing a father back to his yearning family and righting a grave sentencing injustice.

Now, I have had another deeply felt moment when my Torah was borrowed by the Aleph Institute — one of the organizations that I have assisted pro bono on occasion — and brought to prisons over the Jewish High Holidays. My Torah was chanted for the Jewish prisoners as part of the services conducted by Aleph rabbis around the country.

The cover of the Torah was especially designed for me with the inscription “Justice, justice must you pursue,” a command from the book of Deuteronomy. That particular verse was in my bar mitzvah portion, which I chanted 68 years ago. It has always inspired me.

My favorite interpretation is that the word justice is repeated because no two people can agree on what constitutes real justice. When I represent defendants accused of horrendous crimes, I am accused of bringing about injustice, especially if I win, or if I get a good deal for my client. Justice for my clients is seen as injustice for their alleged victims. The justice system is seen by some as a zero sum game in which every winner produces a loser.

The message of the Torah with its repetition of “justice” — and of the Aleph Institute with its humanitarian and religious outreach work on behalf of the imprisoned — is that justice can be fair to both the accuser and the accused.

Unjustly long sentences and unjustly brutal prison conditions do not serve the interests of anyone — or of justice, however defined. The imprisoned — whether guilty, innocent, or somewhere in between — deserve to be treated humanely and with an eye toward rehabilitation and eventual return to society. In too many of today’s prisons and jails, practices such as long-term solitary confinement and tolerance of rape produce high rates of recidivism that benefit no one. Suicide and mental illness are rampant in many prisons, especially those operated for profit by private companies. Prisoners who lose contact with the outside world — with relatives, friends, and their religious or social contact — have the highest rates of failure and recidivism.

The Aleph Institute joins many other similar organizations in performing an important role by caring for the religious and humanitarian needs of prisoners. It is these prisoner-oriented organizations and programs that make life in prison tolerable, and a non-criminal return to society more likely.

I’m thrilled that my Torah has become part of Aleph’s mission to help prisoners. I hope my Torah is taken into many prisons and chanted to many prisoners. The message of the Torah can inspire prisoners to change their lives and become productive citizens. Perhaps this will give rise to a new interpretation of “Justice, justice must you pursue”: it is not enough to pursue justice for those of us outside of prison; it is imperative to pursue it as vigorously for the forgotten who are serving time in some of the most brutal places in the world. So I hope my Torah is taken to many prisons and chanted to many prisoners.