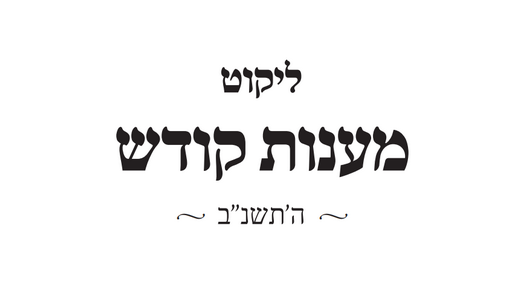 As the Rebbe’s fame spread throughout the years of his leadership, the amount of people who contacted him for Brachos and with questions grew tremendously from year to year. The USPS confirmed that the Rebbe got almost the most mail delivered to him daily in the United States – second only to the President.

Besides for the traditional letters in reply, the Rebbe would sometimes write a short to the point answer to these people’s letters. To be given over verbally over the telephone or by fax, these answers were dubbed “Maynos”.

As the years progressed, and answering each and every person with a full letter become more and more time consuming for the Rebbe, the system of “Maynos” became more and more the common way of receiving an answer from the Rebbe.

Unfortunately, these precious answers of the Rebbe – sometimes on very important and fundamental topics – scarcely made it to the public. Some people didn’t even think it necessary to write down the exact wording, making the Rebbe’s opinion on many things, especially on subjects that only came up only in the later years of his leadership, unknown.

As the years pass since Gimmel Tammuz, Chassidim’s thirst for knowing the Rebbe’s opinions are growing increasingly. Over the last year, a team was formed called “Vaad Likkut Maynos” who volunteered to work tirelessly to collect as much answers of the Rebbe as possible. Starting with the hundreds scattered out amongst various Seforim, Teshuros and Magazines, they also reached out to many individuals received from the Rebbe who gave them (sometimes anonymously) to be printed in an organized manner.

In honor of Vov Tishrei – the Rebbe’s mother’s 55th Yortzeit, a new Kovetz was published, 3-months in the making, containing over 500 answers of the Rebbe from the years 5752 (1991-1992). These answers covered a vast number of topics, from a Bochur wanted a Yechidus to explain to the Rebbe the benefits of the Swami Rama Cult, a businessman who forgot to put on Tefilin because of work, to Shliach in financial trouble. The Kovetz features answers that the Rebbe sent out the morning of his stroke on 27 Adar I 5752! It should be noted that many of these answers are printed here for the very first time!

This Kovetz is the fourth in its series, as Vad Likkut Maynos  previously published ליקוט מענות קודש תשמ”ט, a collection of the Rebbe’s answers from year 5749 (1989), which was distributed this year in honor of  Yud Shevat.

The next installment of “Likkut Maanos” containing all the Rebbe’s answers from the year 5748 (1988) is already in the works and will IY”H be published in honor Rosh Chodesh Kislev this year.