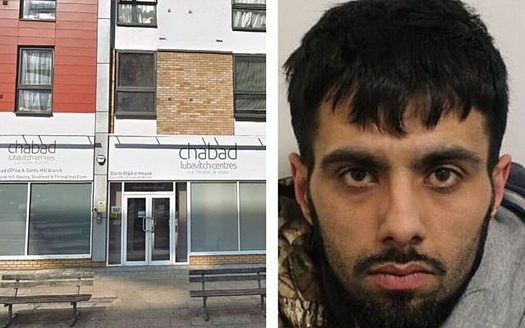 by Mathilde Frot – Times of Israel

A man who admitted to pinning anti-Jewish posters on Chabad Lubavitch Synagogue in Ilford in 2017 has avoided jail, the Met Police revealed.

Shehroz Iqbal, 27, from Ilford, was sentenced last Friday at Snaresbrook Crown Court for displaying material “written material that is threatening, abusive or insulting intending thereby to stir up racial hatred”, after pleading guilty to charges earlier this year.

He received 12 months’ imprisonment, suspended for 24 months, 30 days of rehabilitation activity and 60 hours of unpaid work. He must also pay a £100 fine for breaching a previous suspended sentence.

An eyewitness alerted police after seeing Iqbal, who was dressed in camouflage clothing, tape antisemitic messages to the walls of an underpass near Gants Hill Underground station in East London on an evening in March 2017.

He then saw Iqbal attach anti-Jewish material to the outside of Chabad Lubavitch Synagogue, which was caught on CCTV. Iqbal fled before local police.