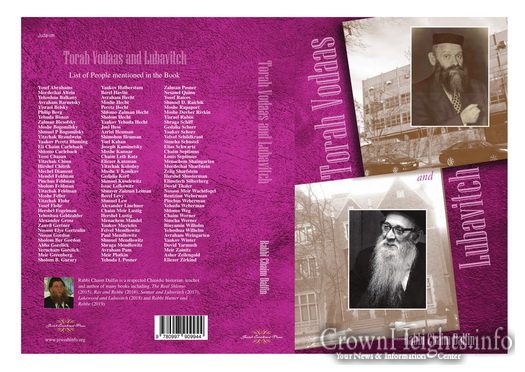 In conjunction with the centennial of Yeshiva Torah Vodaas (1919-2019,) a new book is released exploring the relationship between Rabbi Mendlowitz of Torah Vodaas and Rabbi Jacobson of Chabad.

Some other important issues discussed in this book include:

· Why was Reb Shraga Feivel Mendlowitz opposed to students going to the Malach?
· How did Reb Yisroel Jacobson inspire TV students to learn Chasidus?
· What did Rabbi Moshe Wolfson write to the Lubavitcher Rebbe in 1971 about his two star students who wanted to transfer to Lubavitcher Yeshiva at 770?
· What did Rabbi Belsky say about the Tanya shiur at TV? Why did Rabbi Lebowitz leave TV in 1933? Is TV a Chasidic or Litvish yeshiva?
· What type of relationship was there between Rabbi Mendlowitz and the Rebbe Raayatz?
· Why did Reb Aron Kotler stop Rabbi Mendlowitz from opening a “kosher” college?
· Rabbi Mendlowitz was a Chasid of the Baal HaTanya!
· Is the TV of today like it was 100 years ago?

The author, Rabbi Chaim Dalfin, adds this monumental work to his highly popular books, Rav and Rebbe, Rabbi Hutner and Rebbe, The Real Shlomo, Satmar and Lubavitch and Lakewood and Lubavitch.

The book has extensive end notes, which are not just an adjunct to the book but a complimentary source for better understanding the text. Additionally, the book has a first-ever letter published from Rabbi Moshe Wolfson, the Mashgiach of Torah Vodaas to the Rebbe about two of his prize students leaving Torah Vodaas for the Lubavitcher yeshiva, Tomchei Temimim-770.

The book has unique pictures and documents from Rabbi Shmuel Kuselewitz the former Masmich who gave rabbinic ordination at Torah Vodaas from the 1940s to 1960s. A partial copy of his Will is published showing he left money to Lubavitch. Finally, the book mentions over 100 hundred students who learned either in TV, Lubavitch or both from 1919 to 2019.

The Jewish world both academic and lay world will welcome this to its important scholarship for future generations.