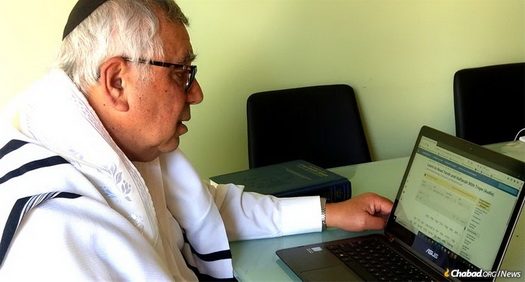 Growing up in Soviet-era Ukraine and now living in Australia, Fima Shmulbard decided at age 67 to continue his Jewish journey with the difficult task of learning how to chant the weekly Haftroah portion in synagogue, doing so with the help of his rabbi and Chabad.org's online Torah Trainer.

Sixty-seven-year-old Fima Shmulburd was born in Ukraine during Soviet rule, and the child didn’t know he was Jewish until overhearing a conversation between his grandparents in Yiddish. “My grandfather made a joke about G‑d,” Shmulburd recalls, “and grandmother berated him, yelling, ‘You are a Jew!’” At 13, his bar mitzvah celebration consisted of cake and a glass of tea; his grandparents gave him a watch as his sole bar mitzvah gift.

The childhood of David Arbital, 51, of Tulsa, Okla., could not have been more different. Arbital was born and raised in postwar America, and had the common Jewish experience of freely and proudly experiencing Judaism, having a traditional bar mitzvah in which after years of training he proudly chanted Maftir, the relatively brief final part of his bar mitzvah portion followed by the week’s Haftarah before an admiring family and large congregation—an exercise which, like for most American bar mitzvah boys, he assumed at the time he would never have to go through again.

Yet as both men grew older and moved forward in their separate journeys they came to have the same dream: Chanting in synagogue on Shabbat, an effort that requires months of training and practice. While chanting the Haftorh is difficult mastring the Torah portion is prodigious. A Torah scroll is written without the vowels and cantillation notes found in every Chumash. That’s thousands of points that must be remembered exactly and, for the vowels especially, delivered precisely before a synagogue audience that is following your every word, something that can be daunting even for a seasoned reader.

What made both men want to go through the strenuous, time-consuming effort of learning how to chant as adults and then getting up in front of a congregation?

Five decades after his meager bar mitzvah in Ukraine, and, now living in Sydney, Australia, near the famous Bondi Beach, Shmulburd wanted to have a proper bar mitzvah, and that, to him meant chanting the Haftorah in synagogue, he told Chabad.org.

“I was 67 years old, and 6 plus 7 is 13, so I asked my rabbi if I could now have a bar mitzvah.” His rabbi, Rabbi Yehoram Ulman of Chabad of Bondi agreed to help, and he set off to study his Torah portion. He had already learned to read Hebrew, but couldn’t chant the weekly reading with the melodic signs known as trop, or cantillation. “I went online, and could not find anybody besides Chabad.org was offering an interactive Torah Trainer.” Shmulburd set himself to the task, and spent many hours on the site preparing himself for his big day.

The bar mitzvah came along, and he rose to the task. “It was flawless; everyone complimented me, it made me very proud,” he says of his experience.

For Shmulburd, this was just the beginning.

A Step in an Oklahoma Journey

Like Shmulburd, David Arbital views reading the Torah as a step in his journey.

“It’s a beginning. I want to keep learning as I move forward in life.”

The 51-year-old Arbital would regularly study the weekly portion on Chabad.org, but that wasn’t enough for him. “I’ve had this dream that along with that, I want to go back and start learning how to actually read from the Torah.”

Arbital studied together with his rabbi in Tulsa, Rabbi Yehuda Weg, supplemented by Chabad.org’s online Torah Trainer, which he says was instrumental in his success.

“Everybody was like, ‘Yasher Koach!’ ‘That was great!’ ‘I didn’t know that you were learning to read Torah.’ It was pretty awesome.”

For Arbital, this was a dream come true.

“This is something I’ve been dreaming about. I was asking G‑d for the ability to learn how to do this, and now I realize that I can.”

The Torah Trainer was “absolutely instrumental in preparing me for the bar mitzvah,” says Shmulburd, noting that the trainer helped him “get up to speed and pronounce the words correctly.”

For Arbital, a useful feature is the ability to tap on any word or phrase and replay it over and over, until the user is able to properly pronounce and sing it. “You can keep just playing it over and over, and really learn it, and take your time doing it,” says Arbital. “And you can be anywhere. You could be sitting in a park with headphones on practicing it.”

Arbital says that for him, reading the Torah was a profoundly spiritual experience. “It’s not just doing it, it’s a tool to come closer to G‑d, and a connection to G‑d in a way that I don’t think I ever had before.”

Arbital was so moved by the experience, that it led to many heart-to-heart talks with his rabbi.

“On one occassion, I was telling my rabbi how I’m loving being more and more connected to G‑d. And we were having a conversation about how we, as humans beings need G‑d, and the rabbi said to me, ‘not only do we need G‑d, David, but G‑d needs us, too!”

Now that he’s done so well reading from the Torah, Arbital says he’d like to continue doing it and “learn as much Torah as I possibly can.”