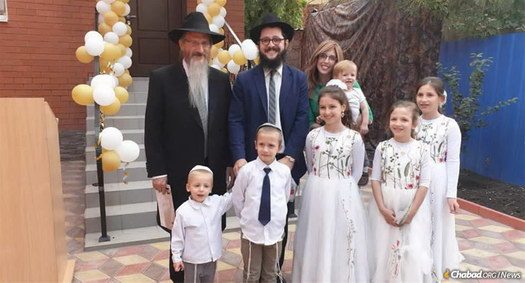 Chief Rabbi of Russia Berel Lazar, left, with Rabbi Yisroel and Deborah Melamed, and their children, in front of the new mikvah in Astrakhan, Russia.

The Jewish community of Astrakhan has roots that go back to the dawn of recorded history in Eastern Europe. Situated near the salt mines of Lake Baskunchak, northwest of the Caspian Sea in the southernmost reaches of Russia, Astrakhan has experienced the historical ebbs and flows of Jewish trade and settlement. It was well known to the rabbis of the Talmud, who referred to the “salt of Astrakhan” by name, noting that it was coarser than the “salt of Sodom,” common in the Holy Land (Beitza 39a).

It is unlikely that a Jewish community was there in the Talmudic era; the first written record of Jews living in the region is from the mid-10th century. The Jewish community at the time was believed to be Khazars, a tribe of noble warriors who had converted to Judaism centuries beforehand.

Most of what is known about the group, which vanished in the early centuries of the second millennium, comes from a letter from their king to Hasdai ibn Shaprut of Cordoba, Spain. But for the last century, Astrakhan has been without one of the most central and important features of any Jewish community: a mikvah.

The more recent Jewish community of Astrakhan, like other cities where some Jews were permitted to live outside the Pale of Jewish Settlement, was developed in the 19th century by the “Cantonists,” Jewish boys who had been forced into the Russian army for 25-year terms of service. After that ordeal, they and their children were granted the privilege of settling in parts of the Russian empire normally forbidden to Jews, including Astrakhan.

The city had actually been included in the Pale in 1804, but then excluded in 1825, and Jews were forced to leave the city in 1835. The Jewish soldiers were thus the only legal Jewish denizens of the city, and a community was eventually formed.

The community’s first rabbi was Rabbi Leib Daikhes, who worked to enhance Jewish observance in what is sometimes called Russia’s southernmost city.

But decades of Communist repression of religion took their toll, and the local mikvah, housed in the grand Choral Synagogue, was forced to close in 1929. In the ensuing decades, Jewish life in the public sphere continued to dwindle to the point that only the city’s “Nusach Sefard” synagogue was left functioning.

But the Jewish identity remained strong, with some local Jews even maintaining the tradition that they are descendants of the Khazar converts of more than 1,000 years ago.

In the post-Communist era, the community regrouped in 2003 and reconstructed its synagogue on the same grounds of its original place of worship, maintaining many architectural elements of the synagogue built by the Cantonists.

Since 2010, the community of approximately 1,500 Jews has been served by Rabbi Yisroel and Deborah Melamed. As Jewish knowledge and observance grew, the need for a mikvah became more and more acute.

Before Taya Kuzmin, a local hairstylist, got married in 2015, she and her husband discussed that mikvah would be an important element of their marriage. Having seen the beautiful mikvah in Moscow, she was determined to observe the mitzvah in Astrakhan.

“The nearest mikvah to us was in Volgograd, a six-hour bus ride one way,” explained Deborah Melamed. “The other option was to take the 12-hour train ride to Saratov or a two-hour flight to Moscow.”

Kuzmin recalls taking the bus to Volgograd, rushing through the mikvah procedure in order to catch the overnight bus home and arriving to work the next day exhausted.

She then asked her husband to see about using a local body of water, the Volga River. When mikvah night came, Melamed accompanied her to the riverbank. At first, all seemed fine, and even the sight of a nearby prison bathed in floodlights couldn’t dampen their optimism and excitement.

As they approached the water’s edge, they were greeted by swarming mosquitoes, reptiles and rodents that they could only feel and hear in the tall grasses, but not see.

“I repeated the Shema Yisrael prayer over and over again,” she said, “hoping it would get me through the ordeal. “I felt I could not do it again; I was terrified of swimming in the dark. My knees trembled, and I knew this would be the first and last time I would use the river as a mikvah. The moments afterwards are a time for personal prayers, and I prayed that we get our own proper mikvah right here in Astrakhan.”

After that frightful experience in the river, Melamed and her husband decided that the time had come for their city to once again have a proper mikvah of its own.

With the help of generous funders, local as well as international, a beautiful mikvah was built on the synagogue complex.

The grand opening, held on Sept. 4, was attended by a roster of local dignitaries, including Alexander Zhilkin, the former governor of Astrakhan.

The proceedings were overseen by Chief Rabbi Berel Lazar, New York-based Rabbi Shlomo Fallman, and Rabbi Abraham Waldman of Mikvah Ramu and Professor Daikhes from Moscow, a supporter of the community and a descendant of Rabbi Leib Daikhes.

Following the rabbinic principle that “one mitzvah pulls another in its wake,” three young men used the opportunity to undergo brit milah, taking for themselves the Jewish names of Dovid, Akiva and Binyomin.