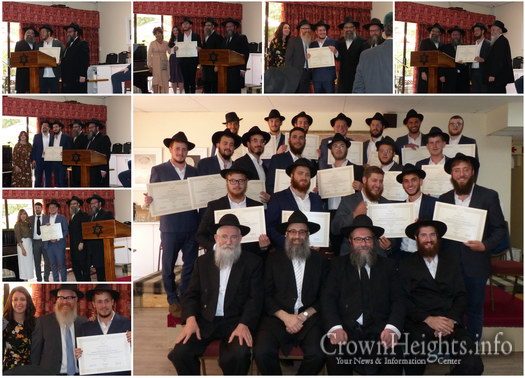 This past Sunday, 15 Elul, saw the Yeshiva LeRabbonus Pretoria celebrating the granting of Semicha to 19 Bochrim, כן ירבו, some of whom had been in the Yeshiva for two consecutive years.

Those who were present for the two years, received semicha on the “regular” components of Semicha, while those who had joined for the “pre-Semicha” as well, included areas of Halocha such as Tefilla, Mezuza, Tevillas Keilim and other practical areas of Halocha.

Having sat a gruelling final test some two weeks ago, which included all areas studied for Semicha, the musmachim achieved a Semicha signed by the Rosh Yeshiva Rabbi Chaim Finkelstein, Rabbi Gidon Fox, Rabbi of Pretoria Hebrew Congregation and a teacher in the Yeshiva, as well as Harav Hagaon Rabbi Zalman Nechemia Goldberg of Israel.

The graduation ceremony was preceded by an uplifting Shabbos shared with the many parents who travelled from far and wide to be part of this momentous occasion in their son’s lives. From Crown Heights to London, Viena to Brazil, and everywhere in between, all the parents were struck by the warmth of the community, the knowledge achieved by their sons and the valuable opportunity and experience which the Yeshiva gave to their sons.

Present at the Tekkes were the other members of Hanhola, Mashpia Rabbi Yosef Yitzchak Kesselman and Mayshiv Rabbi Simcha Frenkel. The Yeshiva Board, headed by the internationally acclaimed Louis Pearlman and Rabbi Mendel Goldman, the creators of “Chayenu”, and Mrs Susan Fine basked in the radiant light which the Yeshiva shines on the community of Pretoria and Southern Africa in general.

Tribute was paid to the em habayis, Rebbetzin Aviva Fox, whose dedication and care for the Bochrim provided more than just a home away from home, but a mother away from home.

Room is still available for the coming year. Anyone interested in applying to the Yeshiva may do so by going to smicha.co.za or by emailing admin@smicha.co.za