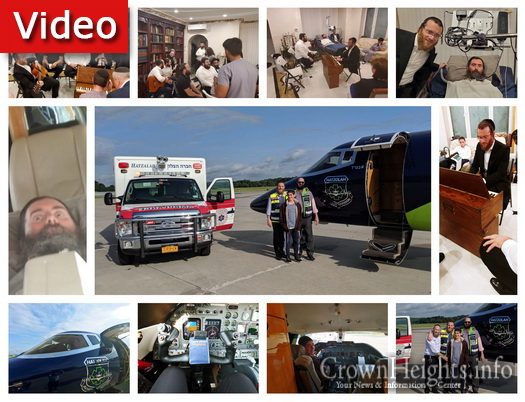 As Rabbi Yitzi Hurwitz and his family prepared to head back to California, they held a kumzitz at a family members home in Crown Heights that lasted well into the night. Rabbi Yitzi flew home Wednesday morning.

As Rabbi Yitzi Hurwitz’s visit to New York City came to an end, his family came together Tuesday night for a Farbrengen and kumzitz at a family members home.

Rabbi Yitzi, who along with his wife are the Shluchim to Temacula California, is battling ALS, a disease that has left him unable to move, and on a ventilator. He made the long journey from California to New York City to attend the Bar Mitzva celebration for his youngest son Shalom, which was held in Crown Heights.

With Yitzi’s plane leaving Wednesday morning, famous Chazzon Yanky Lemmer joined the family by the farbrengen and kumzitz, singing for Yitzi and the family. Also singing at the kumzitz was Aryeh Hurwitz, a family member of Rabbi Yitzi, and a well known Chazzon.

In the early hours of Wednesday morning, Rabbi Yitzi was picked up by two Crown Heights Hatzalah volunteers, and brought by ambulance to the airport where Hatzolah Air’s Jet was waiting to fly Yitzi back home.