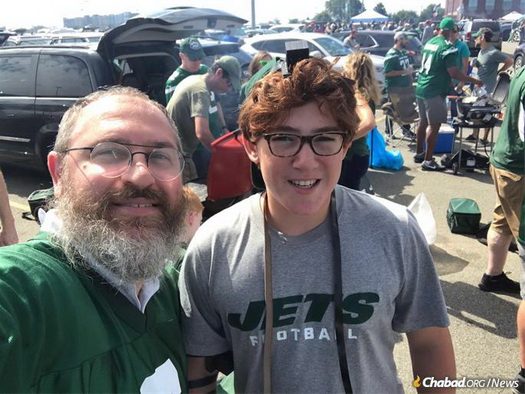 As fans of the New York Jets gathered to tailgate before the team kicked off their season in MetLife Stadium, a group of Jewish fans brought a more spiritual take to the festivities. Armed with tefillin and a shofar, Rabbi Eli Goodman of Chabad of the Beaches led a group of congregants in what is being dubbed the “Tefillin Tailgate.”

“The main idea of this tailgate is to bring home the message that tefillin have an important message in today’s times,” Goodman told Chabad.org. “We’re explaining the importance and relevance of ancient Jewish mitzvot, and hopefully we’ll wrap tefillin with a whole lot of people.”

With the opener taking place in the month of Elul, they brought along a shofar, which is traditionally blown during this month to herald the upcoming New Year.

Goodman says the inspiration for the event grew out of Chabad of the Beaches’ “BLT” (Bagels, Lox and Tefillin) services, which take place on the first Sunday of every month. Goodman encourages people who aren’t regular attendees at Sunday morning Shacharit services to pop by for a few minutes to wrap tefillin and enjoy breakfast. The event takes place in a coworking space, so some who may not be comfortable in a synagogue feel at ease in the more laid-back environment. And it’s proven to be immensely popular. “From an initial crowd of 40, we’ve grown to over 100 participants,” he said. “And it’s not just the rabbis who are involved — we’ve got about 10 laypeople who’ve stepped up to help others put on tefillin.”

In the wake of BLT’s ongoing success, congregant Maurice Borenstein — himself an avid Jets fan — suggested they bring the initiative to the stadium. On Sunday, several vansful of congregants headed out to the stadium, where they had a space reserved in the lot for their tailgate party. They brought along kosher hero sandwiches, soft drinks, and plenty of l’chaim to enjoy in moderation.

While Goodman, a native of Melbourne, Australia, says he prefers cricket to football, he’s joining his congregants in rooting for the home team. “When in Jets territory,” he said, “Do as the fans do!” ”