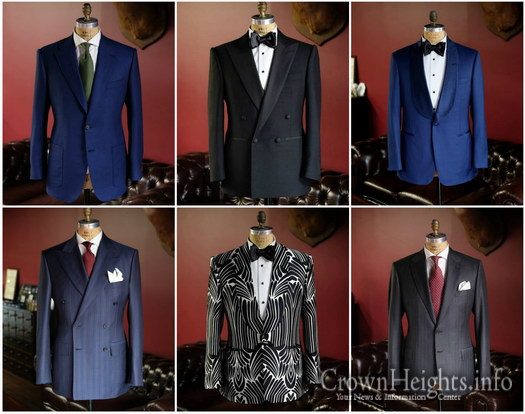 The atelier of Rabbi Yosel Tiefenbrun is tucked away on a deadend street in a treeless, industrial corner of East Williamsburg. Foul smelling runoff from hosed down garbage trucks fills gigantic potholes. Delivery trucks roar by belching smoke, and an occasional Uber creeps along the block, apparently lost. Nothing about the area suggests the home of a highly sought after bespoke tailor. But that is part of the charm of the Tiefenbrun experience: through a red metal door of 188 Scott Avenue, I walked up a set of metal stairs and entered a strange second floor sanctuary, greeted by Tiefenbrun himself, a 30-year-old man wearing a three-piece navy pinstripe suit with gold rimmed glasses and a shapely red beard. With the help of his assistants and interns, Tiefenbrun will measure, draft, cut, and sew a garment for a customer from scratch, fitting it exactly to his client’s body and tastes. Bespoke tailors are rare in this part of Brooklyn, or really anywhere in New York these days. Rarer still are bespoke tailors who also happen to be ordained rabbis—which is exactly what Yosel Tiefenbrun is.

On first blush, the interior only suggests that this is the workplace of a tailor well-versed in the codes of masculinity: burgundy walls, leather tufted club chairs, a fitting area with an ornate three-way mirror, and a generously stocked bar and coffee area for visitors. WBGO, the Newark-based jazz station, burbled in the background. Racks of suits in progress or waiting to be picked up divide the workspace in the back, where Tiefenbrun’s assistants can be seen sewing, steaming, and pressing. Mannequins show off whatever the tailor has been working on lately: a stone colored double-breasted linen jacket, a light brown cotton overshirt with cigar pockets, a charcoal flannel suit with peak lapels covered in basting threads.

A framed oil portrait hanging above Tiefenbrun’s desk catches my eye—nothing weird about that—until I realize it’s of the founder of Chabad, Rebbe Menachem Mendel Schneerson. Known simply as “the Rebbe,” Schneerson is revered as a messianic figure, responsible for the Hassidic community’s turn outward to the modern world. After the holocaust, he helped establish a massive network of synagogues, youth groups, and community centers whose mission is to bring secular Jews back to god and to convert non-believers; those young guys dressed in black standing on the corner offering Hannukah candles to passersby are likely Chabad boys, as Tiefenbrun once was. “My grandfather painted that; he was a portrait artist,” he said of the painting, in an accent somewhere between Kennsingston and Shtetl. “He was a great influence on me. I would speak to him every week I was in London. He would be up to date: ‘Oh, how are your buttonholes?’”