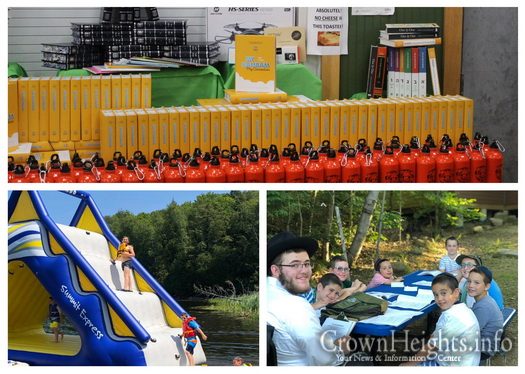 As the campers exited the buses, some went directly home with their parents, while others were taken to the airport. They were all exhausted, but, noticeably invigorated with CGI Toronto Chayus. “We trust we accomplished our goal to provide a summer experience that strengthened their bodies and nurtured their Neshamos with Chassidishkeit and Hiskashrus to the Rebbe,” said Rabbi Itchy Grossbaum, camp director. “In fact,” he continued, “the Rebbe once noted when extolling the virtue of Gan Israel, that the youngsters can reach new heights even to the level of “Kodesh Hakadoshim!”

In conjunction with the completion of the 38th cycle of Rambam on 4 Menachem Av, CGI Toronto joined many other camps via live stream and celebrated the Siyum. The entire camp session was replete with encouragement and inspiration of Limud Harambam. From songs to skits the boys were propelled with motivation to undertake learning Sefer Hamitzvos. After optionally studying for a minimum of ten days and answering questions, each camper earned and was gifted the newly unveiled special children’s edition of Sefer Hamitzvos, titled, My Rambam, My Connection.

“We are proud to say that most of the campers chose to exceed the minimum requirement and learned Rambam every day,” noted Rabbi Shmuli Grossbaum, Ruchnius director. These boys received additional incentives. The dedicated staff members appointed to lead this initiative worked tirelessly and their efforts were certainly noticed.

Coming out of the dining hall after lunch the P.A. system blasted the new popular song, “Celebrate Siyum Ha’Rambam” and the message was “in the air.” Indeed, the daily rest period was a dedicated time frame for the daily Mitzvos.

Yet, in order to continue fostering the Chayus for this incentive we encouraged the parents to keep up the momentum. At the end of the new book there is a chart for each child to keep track of his learning. At the conclusion of 4 weeks (beginning tomorrow) until Rosh Hashana upon receipt of a photo of the completed checklist every CGI Toronto camper will be entered into a prize raffle.