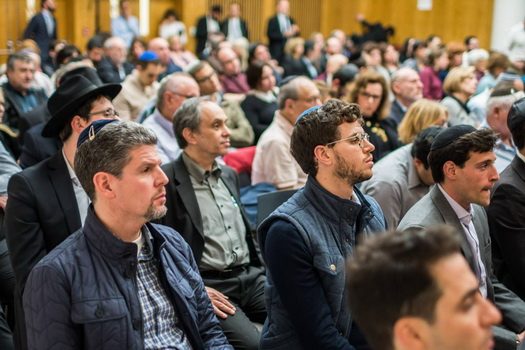 JEM: Communities Learn From The Rebbe How to Combat Anti-Semitism

Hundreds of shuls and Chabad Houses held viewings of the new JEM Presents: The Rebbe on Anti-Semitism presentation over Tisha B’av, and countless people played it in their homes. Overall, many tens of thousands watched and learned from the Rebbe.

Jews experience Anti-Semitism on a daily basis. Many seek methods on how to deal with it, and many ideas are proposed. Some recommend that we act less Jewish, that way people will accept us. Others suggest staging demonstrations and protests, and still others insist on not retaliating in the hope that the world will ignore us.

As ever, the Rebbe’s clear, unabashed voice rises above the clamor. The Rebbe on Anti-Semitism portrays how, drawing from the timeless wisdom of our sages, the Rebbe explains the cause of anti-Semitism and sets forth an ideology for mitigating it.

“The video really educated the viewers about the Rebbe’s views,” reported Rabbi Mendel Shemtov, Chabd rabbi in Montevideo, Uruguay. “Everyone enjoyed the fact that they were learning directly from the Rebbe.”

The presentation was a hit on social media as well, and the numerous comments, shares, and likes, are still adding up.

Ken Gatz, Founder and CEO of Proseeder, watched it after a friend suggested it. “The Rebbe relates Judaism to modern events in a fascinating way. I would love to hear more from him .”

Viewers appreciated the less-frilly, unfiltered style that provided an opportunity to learn and walk away wiser. And the video was translated into five languages – English, Russian, Hebrew, French and Spanish, to benefit other audiences as well.