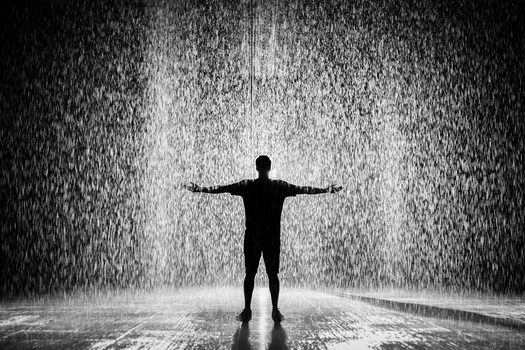 It was raining the morning after the Seder. Pouring.

I would not be driving. And the Torah prohibits us from carrying on Shabbat, so I didn’t have an umbrella either. What I did have was a nice Italian suit and a score of congregants waiting for me at the synagogue.

Kevin Cahil, my neighbor, was sitting in his car as I walked by his house, already soaked to the bone. A local New York State Assembly member, Kevin is an Irish Catholic and a real mensch.

“Then take my umbrella.”

I explained why I couldn’t. So he started driving away. But then he turned around.

He hopped out of his car, snapped open his umbrella and told me to start walking.

And so we did. For an entire half mile, some of it on rocky terrain, Kevin walked by my side, holding the umbrella over our heads. “My Dublin-raised grandmother would be shepping nachas,” I told him.

He left me at the entrance to the synagogue, and walked the half mile back all by himself.

We hear a lot today about anti-Semitism—about hatred and divisiveness. I learned that day that most people respect us when we stand (walk) proud in our beliefs. Kevin and I acknowledge that we’re both here to make this world a better place—I as a practicing Jew, he as an assemblyman. And we’re committed to helping each other fulfill those missions.

As we parted ways, Kevin asked what I’m sharing with my congregants today. “Oh,” I replied, “I bet I’ll think of something.”

Rabbi Yizhak Hecht is the director of Chabad Lubavitch of Ulster County in Kingston, New York