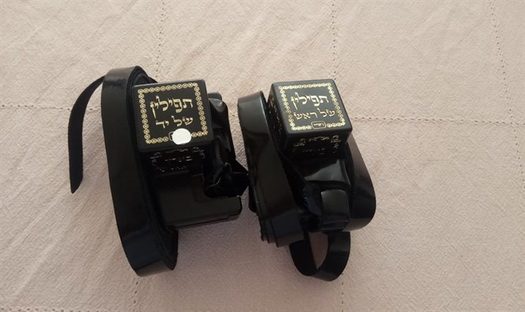 The tefillin (phylacteries) of slain IDF soldier Benny Hanani, who fell in Tal Saki in the Golan Heights during the Yom Kippur War, remained in a closet for 46 years, together with the notebook with songs which was discovered after his death.

Eventually, Hanani’s family decided to donate his tefillin to a lone soldier serving in as an IDF paratrooper, as part of the project “1000 Pairs of Tefillin for Soldiers.” The project is in memory of Deputy David Golovensitz‎, who fell in 2017 during an IDF operation in Hevron.

Hanani’s sister, Rivka Ben-Aharon, said: “We live in Efrat, and my husband heard about the ‘1000 Pairs of Tefillin for Soldiers’ project in memory of David Golovensitz‎. My husband told David’s father Shimon about Benny’s tefillin, which have been lying in the closet for dozens of years. When Benny was killed, we were left with nothing but his tefillin and his notebook with songs.”

The tefillin were given to Shimon Golovensitz‎, who asked Chabad hasidim to fix both the boxes and the straps. The parchment itself remained perfect, even 46 years later.

“Benny’s soul is still with us,” Ben-Aharon said. “It’s very emotional and I hope that I will soon meet the lone soldier who is enjoying the tefillin.”

Speaking to Arutz Sheva, Shimon Golovensitz‎ expressed joy at the expansion of the project in his son’s memory.