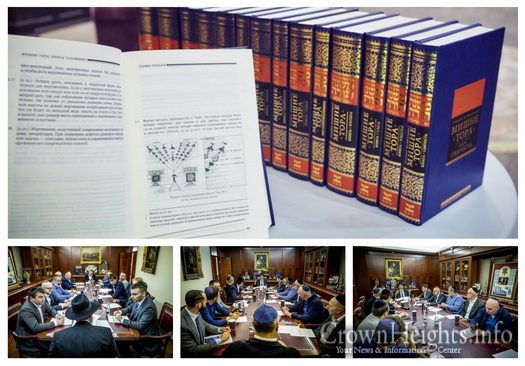 “Therefore, I girded my loins – I, Moses, the son of Maimon, of Spain. I relied upon the Rock, blessed be He. I contemplated all these texts and sought to compose [a work which would include the conclusions] derived from all these texts regarding the forbidden and the permitted, the impure and the pure, and the remainder of the Torah’s laws, all in clear and concise terms, so that the entire Oral Law could be organized in each person’s mouth without questions or objections…”

This quote from the Rambam in his introduction to Mishneh Torah takes on new meaning, as the large-scale, ambitious project of translating all fourteen of his tomes into Russian, along with the main commentaries, has finally come to completion.

The idea came as a result of a weekly Rambam class given by the Chief Rabbi of Russia, Berel Lazar, to a group of Jewish Moscovite intellectuals, amongst them lawyers, professors and the like. For the past few years they have been gathering to study complex issues together, to examine and deliberate complicated laws, as they also roll up their proverbial sleeves in order to assist Russian Jewry.

It was during their regular classes, in which the Rambam is studied along with commentaries, that the need for a full Russian translation of the texts became very evident. Philanthropist David Aminov took the full financial burden on himself.

The special project was assigned to Rabbi Boruch Gorin, Chief of the Moscow publishing house “L’chaim”, and the undertaking was on its way. Dozens of knowledgeable translators and editors, from Moscow and abroad, enthusiastically joined this mammoth project which took a number of years to complete. In an incredible show of Divine Providence, the fourteenth and last tome came off the printing press just a few days ago, as all over the globe hundreds of thousands celebrated the completion of the thirty eighth cycle in daily study of the Rambam, as per the Rebbe’s request.

Thanks to the Rebbe’s many Shluchim throughout Russia, Rambam is now studied regularly by a very wide audience of Russian speakers. Now, with this new publication available, which includes the entire Yad Hachazaka along with translations, study of the Rambam has become so much easier and more accessible. This, in turn, will no doubt bring many more Jews to join the circle of regular Rambam study.