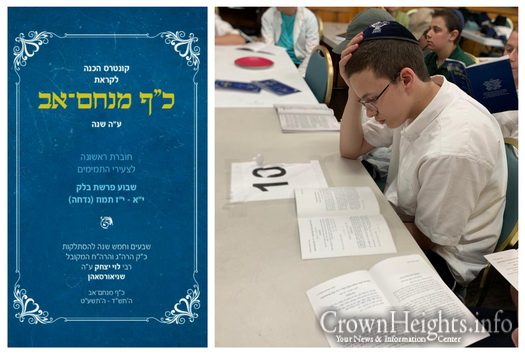 Close to 2,000 Chabad youngsters in camps and Yeshivos Kayitz throughout the United States and Canada are participating in a Mivtza Hachana in honor of seventy-fifth Yom Hilulah of the Rebbe’s father, Horav Levi Yitzchak Schneerson, who passed away on Chof Av 5704 (1944).

Booklets were meticulously prepared by Lahak Hanaohos, under the leadership of Rabbi Chaim Shaul Brook, which include the Rebbe’s explanations on his father’s Torah, Sichos about the personalities of Reb Levik and Rebbetzin Chana, Reb Levik’s Torah – in the form of short Divrei Torah along with explanations and nekudos, as well as portions of Rebbetzin Chana’s memoirs.

Two versions of booklets were prepared, to accommodate the various age groups and levels – varying between older elementary grades and classes in Yeshiva Ketana – and portions were translates into English as well.

The inspiration for this Mivtza comes from the Rebbe’s letter to Shluchim in 5744, before Reb Levik’s fortieth Yom Histalkus. The Rebbe wrote (with an addition in his personal handwriting):

“It is my obligation and great merit to suggest, request and etc. – to study his Torah amidst a gathering, and to donate money to charity l’zecher nishmaso.

“He sacrificed his life to spread Yiddishkeit among the Jews ‘behind the Iron Curtain,’ and was therefore imprisoned and sentenced to exile, where he passed away and was laid to rest; may his merit protect us and the entire Jewish nation, shlit”a.”

“There is no doubt that this Mivtza brings unbelievable nachas to the Rebbe,” say the members of the committee that runs the campaign, which is made up of a number of Rabbanim, Shluchim and Askanim from around the world, working alongside Lahak Hanochos, the Vaad Hatmimim, and the Menahalim of Chabad schools and Yeshivos Kayitz throughout the United States and Canada.

In Rebbetzin Chana’s memoirs as well, we read about her desire to publicize the Torah of her husband. For example, she writes (on 2 Av 5717):

“It’s been thirteen years since my husband’s passing .. I deeply desire that something be published to perpetuate my husband’s blessed memory, either something about his life or some of his scholarly work that he wrote and studied almost until his last moment. Perhaps a time will come for this, either during my lifetime or after. It is my belief that, as a great personage and because of his intellectual accomplishments and great abilities, he certainly deserved this.”

Each week, participants are tested on the material, and after four weeks of the Mivtza, fifty (!) students will be awarded with flight tickets to Alma Ata for Chof Av, to represent all the students who participated. Full service will be provided throughout the journey, and they will return in time to enter the Rebbe’s Ohel on the day of Chof Av as well.

Additionally, seventy-five sets of Toras Menachem – Sefer Hamaamarim (20 volumes, 5711-5731) will be raffled off to the highest achievers in all four tests.

The cost of the publishing and the prizes of this unique Mivtza was graciously covered by two Chassidic philanthropists, Reb Yosef Yitzchak Katz and Reb Sholom Lein, along with other donors; they will also accompany the trip to the Alma Ata.