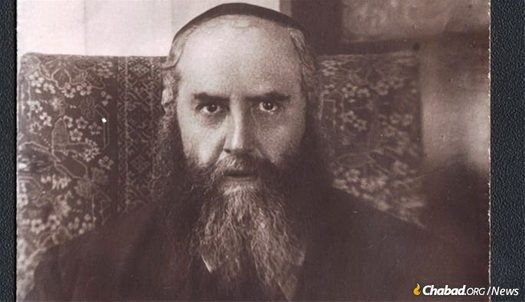 The Sixth Rebbe, Rabbi Yosef Yitzchak Schneersohn, in 1927, around the time he left the Soviet Union for the last time.

A research article published on Chabad.org sheds new light on the secret portrait of the sixth Rebbe—Rabbi Yosef Yitzchak Schneersohn, of righteous memory—that remained behind in the Soviet Union following his 1927 exile from the country.

The little-known episode took place in 1927. That summer, Rabbi Yosef Yitzchak was arrested at his home in Leningrad (today, St. Petersburg, Russia) and sentenced to death by Bolshevik authorities. Due to pressures exerted on the regime, the Rebbe’s sentence was commuted several times, leading ultimately to his release from internal Soviet exile on 12-13 Tammuz, the 92nd anniversary of which is being marked this year on July 15-16. After a summer of intrigue, the Russians decided to exile the Rebbe from the USSR, and Rabbi Yosef Yitzchak, his family and his library left for Riga, Latvia, in October of 1927. Just before departing, his photo was taken, and a copy of ito was left behind and survived in the Soviet Union for decades.

While bits and pieces of the story have appeared previously, mostly in Hebrew, Chabad.org’s research—conducted by associate editor Dovid Margolin—illustrates the historical context surrounding the episode and the singularity of the photo’s survival, and also reveals a copy of the photo complete with contemporaneous photo studio markings.

Margolin’s research also led him to Rabbi Azriel Chaikin, both a venerable halachic authority and a senior Chabad-Lubavitch shliach who has served as an emissary of the Rebbe—Rabbi Menachem M. Schneerson, of righteous memory—in Morocco, Denmark, Belgium and Ukraine. Chaikin was born in Soviet Georgia in 1931, where his father served as an emissary of the sixth Rebbe, and Chaikin recalls his father secretly showing him a photo of Rabbi Yosef Yitzchak in the late 1930s.

When Chaikin produced the photo it was, in fact, a second, lesser-known portrait—one that until this point was only known to appear on the sixth Rebbe’s 1934 Latvian passport. The photo somehow crossed the Latvian-Soviet border in the mid-1930s, surreptitiously making it way to Chaikin’s family photo album in Tbilisi, Georgia.

Both Rabbi Yosef Yitzchak’s original Soviet portrait and the Chaikin family photo were kept by Chabad Chassidim in the USSR on pain of severe punishment, and any extant copies were smuggled out of the country together with their owners.

Some 80 years after his father first introduced him to the concept of the Rebbe, Chaikin remembers it well.

“He told me, ‘This is the Rebbe,’ and said that the Rebbe is somewhere, not in Russia,” recalled Chaikin. “He explained to me the connection between the Alter Rebbe of Beis Rebbe and this Rebbe. And he told me a little what are Chassidim and what is a Rebbe, that the government didn’t like what he was doing, and they put him in prison and on 12 Tammuz he was freed, and that he had to go out. And that it was dangerous to admit, to tell anyone that you belong to the Schneersohnsky.”