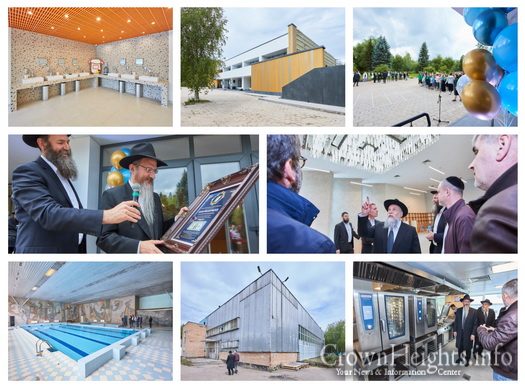 In a small yet impressive event, a newly renovated building was dedicated in Camp Gan Israel of Moscow’s Istra region. Russia’s Chief Rabbi, Rabbi Berel Lazar was there, and he was honored with affixing the mezuzah to the main shul’s entrance.

Throughout the year, the property is home to Moscow’s Yeshiva Ktana “Tomchei Tmimim”. Its students are children of Shluchim and Rabbis, imbued with a Chassidishe warmth and enthusiasm, they are the future Shluchim of Russia. During the summer months, the yeshiva students and staff travel to a different location for Yeshivas Kayitz, and Camp Gan Israel moves in. This is just one of the camp’s many branches throughout Moscow, which give the children a high quality summer experience both spiritually and physically.

The main building hosts a spacious shul with an extensive Jewish library with books, in both Lashon Kodesh as well as Russian, a contemporary well-equipped kitchen which is under the strict kashrus of Russia’s Chief Rabbinate, a large cafeteria, and classrooms.

The entire complex is located in Moscow’s suburbs, far from the noise and pollution of the big city. Surrounded by nature and fresh air, during the summer months, it is possible to provide and instill a Jewish education in those who do not receive a kosher education all year round.

Rabbi Alexander Boroda and the sponsor, Mr. Nathan Lichtenfield were honored with cutting of the ribbon. The event was eloquently emceed by the community’s General Director Rabbi Mordechai Weisberg, who, together with the other Rabbis, presented the sponsor with a special gift – a dollar from the Lubavitcher Rebbe, along with wishes for blessing and success.