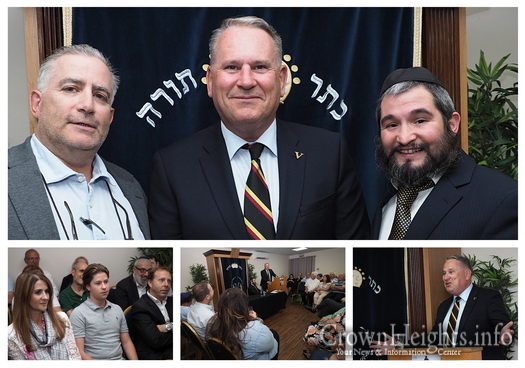 The question on everyone’s lips was – wow, how did you get Col Kemp to Buckhurst Hill?

Close to 100 people came to a beautiful evening at the Chabad Centre in Buckhurst Hill last week to enjoy a canapé dinner and cocktail bar and a fascinating talk followed by questions and answers with Col Richard Kemp.

Rabbi Odom Brandman, Director of Chabad Buckhurst Hill opened the formal part of the evening by welcoming and introducing the Colonel who he said had become “a household name up and down the country and among the Jewish Community in particular due to his so vocal stance supporting Israel and the IDF”.

Col Richard Kemp is a retired British Army Officer who served for 30 years and commanded the British Forces in Afghanistan. After writing a bestselling book on the conflict and being recognised numerous times by Queen and Country for his service, the Col is now a sought after military adviser to the British Government, Media outlets across the world. He has chosen, after assessing from a professional military perspective, to become a strong advocate for Israel and the Israeli Defence Forces speaking up at the UN, EU and to top Government officials all over the world.

The evening began is a full canapé dinner, in true Chabad Buckhurst Hill style, flawlessly prepared by Neil and Alison Cohen and their team, who selflessly give of their time to bring top professionalism in food and service to Chabad Buckhurst Hill events. The food was phenomenal; all prepared freshly in house – Sushi, Lamb cigars, Salt Beef on Latkes, Pulled Chicken Tortillas, Roast beef on crackers and more. It was an extremely delicious meal that left everybody satisfied and ready for a fantastic evening ahead.

Col Kemp started with a 40 minute presentation on a wide range of relevant topics including the current situation in Israel, his personal views and experiences observing the IDF, current world conflicts and politics his personal take on the current American peace proposals.

Following his talk, Rabbi Brandman had the difficult task of fielding questions from the audience. The Col was happy to take any questions, a rare opportunity to ask him absolutely anything on the various topics on which he is an expert. Questions included the Brexit situation, how that might affect Israel, the new incoming British Prime Minister and how that might affect Israel and military intelligence sharing, the Labour Leadership and the uneasy conflicts with Iran and other countries around Israel.

As the perfect end to the evening, guests enjoyed delicious desserts. Everyone appreciated the amount of time and effort that had gone into the evening and left with a lot more knowledge about the important topics that were addressed.